September: Guillotine change their name to Venom, after a Roady/Bikerfriend suggests the name change during a rehearsel session. Jeff buys his first Flying V Guitar.

July: The drummer and singer from Venom mysteriously leave the band.

August: Jeffrey Dunn meets Clive Archer at a Judas Priest concert in Newcastle, then after several drunken meetings at various pubs in Newcastle, Jeff decides to let Clive and his drummer try an audition for the vacancies in Venom.

November: Jeffrey Dunn meets Conrad Lant at a friend's house one evening, they start to discuss music and Jeff says he is looking for a replacement guitarist for his heavy metal band Venom. Conrad decides to go and check out a rehearsal at an old Chucrch Hall in Newcastle's notorious biker area, Westgate Road. After the band run through a couple of Judas Priest numbers, Jeff asks Conrad if he wants to plug the Black Les Paul that he's brought with him into the marshall stacks. Conrad joins the band.

February: The bassist of Venom, Alan Winston quits less than one week before the first gig at the Meth in Wallsend on Friday 15th February 1980 (see picture below). Clive was wearing the face paint. Conrad loans a bass from a friend at the recording studio where he works, and plugs it into his guitar stack, complete with distortin and FX pedals. An unholy recket emerges, the bulldozer bass is born and the band decide to stay with the new line-up change (see pictures below). At this time they also decide to have "artistnames". Clive takes the not so fitting name, Jesus Christe. The other three certainly takes better names. Jeffrey  = Mantas, Conrad = Cronos and Tony = Abaddon. For the record, Cronos comes from Greek mythology and was one of the Titans, the generation that preceded Zeus and the Olympian gods. He was the son of Uranus and Gaia. Legend has it that Uranus was so disgusted by Cronos when he was born that he tried to shove his own son back into Gaia! Abaddon is the Hebrew term for the demon known as ‘the angel of the bottomless pit’. Or The King Of Grasshoppers. Mantas is another name for Tzizimime, who is regarded in certain cultures as a demon of twilight. 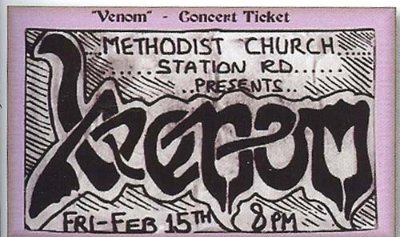 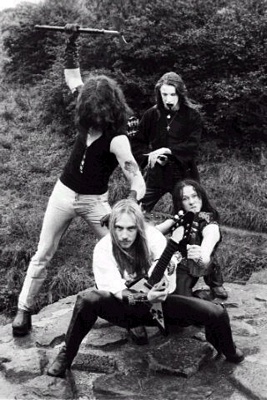 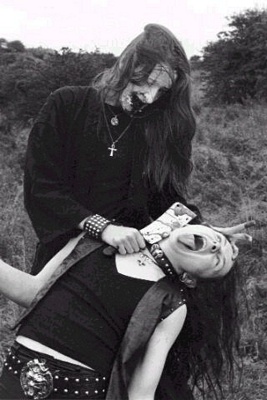 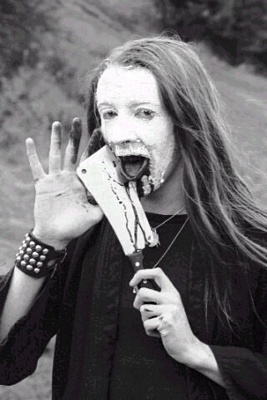 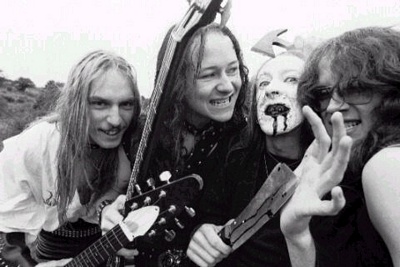 March: Venom play a gig at Newcastle Westgate Road Church Hall, where they rehearse. There was so many smoke pellets detonated within the first five minutes of the gig, that no one could see one foot in front of their faces. All crowd could see of the band were hazy silhouettes of people running around in red flashing inferno. This started Venom´s reputation in Newcastle as absolute lunatics.

April: Venom go in the studio (the Impulse Studio where Conrad works as a tape operator) to record their first demo on April 29th. Conrad asks the recording studio engineer, Mickey Sweeney, to work for free, and also manages to persuade the record company boss David Wood to let him have a half day in the studio for free. 3 tracks are recorded: Angel Dust / Raise The Dead / Red Light Fever. Conrad then makes cassette copies of the 3 songs and sends them to various record companies, radio stations, music magazines & rock venues. 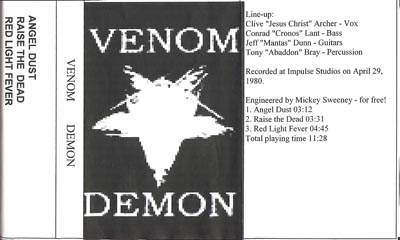 July: Venom get their first Press mention on 5th of July, when Geoff Barton of "Sounds" places all 3 Venom song demos in his personal playlist, for 3 weeks in a row.. This is very unusual as the playlists always show 3 different artistes tracks.

August: Venom play a gig at Heworth Church Hall, Tyne & Wear. The tops of the bomb canisters fly across the crowd's heads to the back of the Hall. The crowd is mostly punks who jump around in a frenzy to the insane music. The singer Clive got so pissed off with the punks spitting on him, that he took the fire extinguishers and covered the first five rows of people in foam. All the band and crew have to sleep at the church hall that night, everyone is too exhausted to pack the truck, so they just get drunk and sleep in the church.

October: On 10th of October Venom go in the studio to record a live demo session. This was known as "The £50 Demo Session", all the other Neat bands has used this offer, where you would get 4 hours to record as many songs as you could, straight to 2 track tape. Venom recorded 6 songs: Sons Of Satan / In League With Satan / Angel Dust / Live Like An Angel / Schizo and Venom. Jeff asks Conrad to sing his new song Live Like An Angel instead of Clive. At the end of the session they had a band meeting and Jeff and Tony said that they preferred Conrad's vocal style to Clive’s. Clive was very big about the whole situation even though he had in reality just been sacked. He even left his PA to Cronos. Clive leaves the band and Conrad takes over on the vocals.

January: Venom go into the studio to record their first Single: In League With Satan / Live Like An Angel. The song Angel Dust was also recorded, the track was used on the Neat compilation album, Lead Weight, later appeared on the first Venom album. The single cover artwork was designed by Conrad, and is based on the symbol of Baphomet which is also used by the Church of Satan. 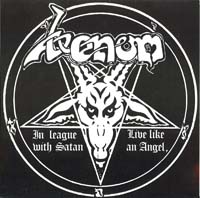 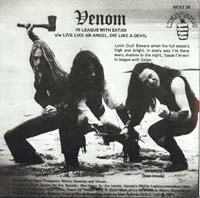 June: Venom play a gig at the Quay Club in Hebburn, Tyne & Wear. This is Venom's first and final gig in a social club, and Conrad's first gig singing live with Venom. They blow the elecctric mains several times, the bombs blacken all the walls, the fire brigade are called out because of all smoke gushing from the building, the regular punters flee at the volume and mayhem. Venom get banned from the entire club circuit.

August: Venom go into the Impulse studio to record their first Album. The band had originally been asked by the record company (Neat) boss to record some demos of all their songs, the band were given 3 days. After the session the record company said they would like to release the demos as an album. Welcome To Hell was born. The same cover as the single was used, although the record company generously agreed to print the cover in gold & black, the Venom logo was designed by Conrad. 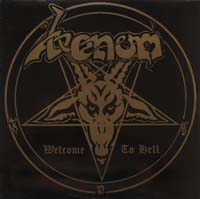 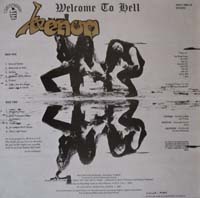 December: Venom receive a 5 star review (written by a really excited Geoff Barton) from Sounds for Welcome To Hell. 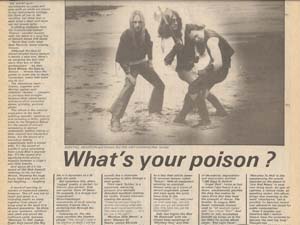 February: Venom get their first big coverage in a magazine, when Garry Bushell and photographer Ross Halfin do a two-page article in Sounds. Issue February 27. Headline: "Back In Black Magic".

June: The first great gig take place in Poperinge, Belgium on the 4th. The venue, Maecke Blyde was packed with 3000 wild metalheads. Some of the songs that was played this night: Witching Hour / Sons Of Satan / Schizo / Leave Me In Hell / Poison / One Thousand Days In Sodom. 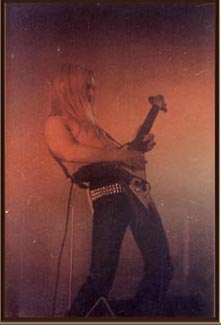 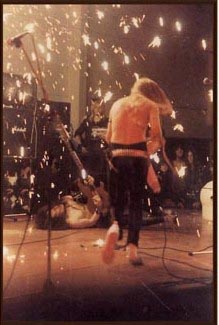 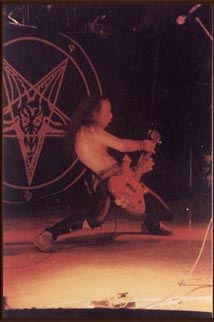 August: Before the new album, a preceding single coupled the non-album tracks Bloodlust and In Nomine Satanas was released on the 13th of August. Edwin Pouncy on Sounds magazine wrote a raving review and made it the Single of the week. "Bloodlust is the almost too perfect hell brew spew laden magnum opus that leaves nothing to the imagination." Also in this session the legendary track Senile Decay was recorded. It first appeared three years later on the collectionalbum From Hell To The Unknown. 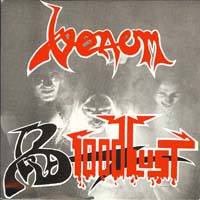 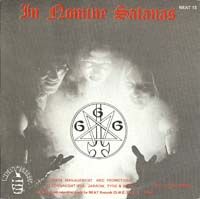 September: This month saw the creation and release of the 2 track video, Live Sept '82, featuring Witching Hour in a new recorded version and Bloodlust. The mainreason for the Video was to give promotors/venues an idea of exactly what  a Venom live show would be like, for example, what size/height of stage would be required. Dífficult to obtain now, it's a hysterical glimpse of the black metal trinity in their early years. 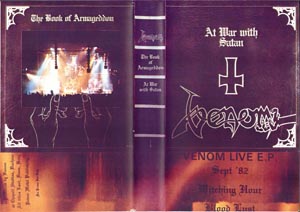 November: Venom again employed Impulse Studios and Keith Nichol for their next recording-session. The album was named Black Metal and was recorded in just six days. In this session also the tracks Hounds Of Hell and S.A.D.I.S.T. was recorded. Both tracks later appeared on the compilation album Skeletons In The Closet. This album triggered the global Venom phenomenon. Neat handled UK versions while Roadrunner licensed the album for European territories. Limited editions saw the album pressed on variety of coloured vinyl including grey, purple, green, red, brown or ´swirled´. Amazing 5 star reviews was written by both Sounds and Kerrang! 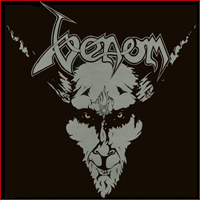 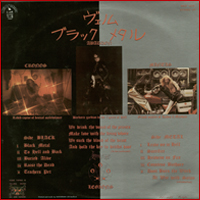 April: Venom play two nights at Paramount Theatre in New York supported by a young bunch called Metallica. This Venom extravaganza was masterminded by Rock And Roll Heaven organization consisting of the two crazies, Jon and Marsha Z and Harold and Sherry Risch. The second gig went well in comparsion with Friday night's show in which power failures interrupted the crushing of bones and sacrifices of non-believers. With the audience screaming in pain, Venom's American assault had been a success. Hell had truly paid a visit to Statan Island. As for the Paramount Theater, when the battle was over and  the rubble was cleared away, it was discovered that one of abaddon's nuclear warheads had blown a four-foot hole in the stage and one fireball had been orbited across the building coming to rest in the upper balcony. Cronos had dealt a destructive blow to his speakers, totally wasting his stacks. When the technician assessed the damage done, the total cost for repairs amounted to "666" dollars!

May: A new single Die Hard is released with B-side Acid Queen. The US-edition on Megaforce came as an exklusive and strictly limited picture disc as part of the "Immortals Of Metal" series. The European fans, on the other hand, got a 12" version on Roadrunner with an extra track, an all-new recording of Bursting Out. 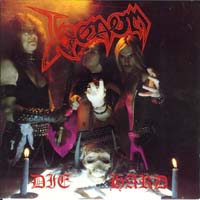 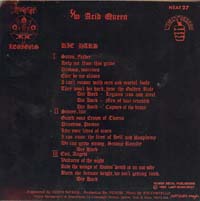 June: Venom was scheduled to headline Aardschokdag on June 25th, however, their equipment had been imponded by U.S. Customs in New York following their shows there in April. As a result, the band was forced to withdraw from the festival an also cancelled a planned European Tour. With plenty of spare time on their hands, Venom and manager Eric Cook embarked on a promotional tour of France. The boys were interviewed for France's #1 Metal radio show and then headed for an in-store autograph session, where they were greeted by 800 fanatical French maniacs. Everything was going nicely until halfway through the session when the security barriers holding the crowd back suddenly collapsed and the band were forced to beat a hasty exit via the store's cellar. They quickly jumped into their waiting 1968 Morris Minor and sped off with several dozen French headbangers in hot pursuit after them.

A couple of days later Venom showed up backstage at Aardshokdag and during Trance's set they went sidestage for some autograph signing. At the sight of Venom, fans began thrusting everything imagnationable at the band for signing. They realized it was time to leave when the Dutch began passing up automotive parts and accessories and Mantas asked "How do you sign a Morris wheel?". Fearing the worse, Eric hurried outside in time to see the last parts of Venom's Morris Minor being carted off by over enthusiastic souvenir hunters!

Just before Accept went onstage, Venom's Witching Hour video was shown on the hall's giant screen and upon its completion Venom went onstage to apologize for not being able to appear. Their appearance was the signal for 9000 roaring voices, the biggest reception all night. A couple of the day's featured band were not all pleased too see Venom bring the house down without even having pick up the instruments!