I have collected magazines and cuttings with Venom since the early years. Here you can read some quotes said by/about Venom. Enjoj! 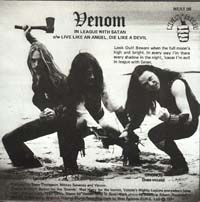 "In League With Satan is a pompous piece of horrifying power plod with vocals that sound like Cronos is being strangled by wire netting wrapped around a rugby player's jock strap. There can't be any other band in the world who sound like that" In League With Satan review by Ian Ravendale (Kerrang! July 1981) 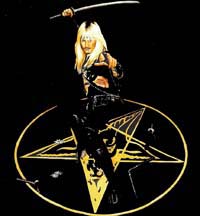 "If you can think of every cliche, that's us. The loud, the fast, the bombs, the black magic....We are every cliche." Abaddon to Ian Ravendale (Kerrang! September 1981)

"An epic of ugliness, a riotous noise, an appalling racket and this is possibly the heaviest record ever allowed in the shops for public consumption" Welcome To Hell review by Geoff Barton (Sounds magazine December 1981) 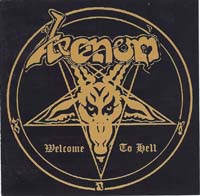 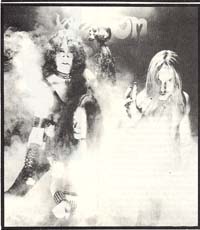 "They are more then stage names. They are states of mind. It's sort of possession. We actually feel possessed before a gig. We start getting really angry and mad. We have to have a fight before we go on stage...it's the only way we can play." Cronos interviewed by Garry Bushell (Sounds magazine February 1982)

"It's loud and ugly, it's viloent and sprawling...Venom have gone into studio and made a real heavy metal single that hurts to listen to but demands your attention at the same time. You come away from it stunned, thinking 'bloody hell, what was that?'" Bloodlust review by Edwin Pouncy (Sounds magazine August 1982) 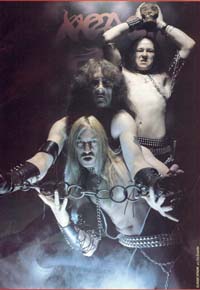 "No-one stands in the front and stays on their feet at the beginning of the set, no-one. I don't care how big they are, they'll duck, and that's a challenge"

"Our music is Power Metal, Venom Metal, Black Metal not Heavy Metal cos that's for the chicks"

"Satan is power and Venom is power so we write about Satan"
Venom in interview with Dante Bunutto (Kerang! November 1982)

"I thougt I had seen and heard it all in Vietnam. But this band scare me more than anything I've ever
experienced before. I'll not go on that stage for anything. The whole audience can invadde, but I'm staying put" Security guard on Venoms concert in New York 1983 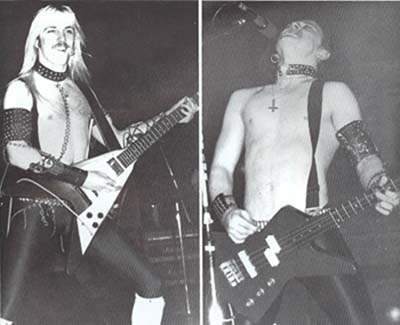 The fire marshalls had been raising havoc backstage after so many bombs had been used so the concertarranger told the band before the encore: "That's it, you have to stop before you kill somebody." Backstage talk in New York 1983 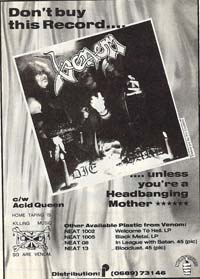 "Noisy crowd. Production is way off the rails, but it's an enthusiastic slaughter-house." Die Hard review by Chris Watts (Kerrang! July 1983)

"All I'll say is, when we get rich enough to afford his hospital bills, we'll fuckin have him!" Cronos in interview with Malcom Dome about a local DJ who never plays Venom records. (Kerrang! September 1983) 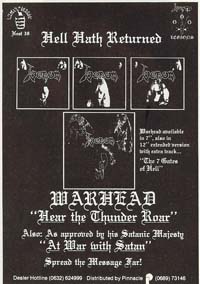 "Every label in the world ought to rush out immediately and try and snap this lot up. They're so different it's ridiculous. The band are utterly and completely Over The Top." Warhead review by Tommy Vance (Kerrang! February 1984) 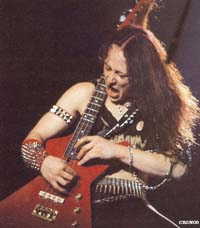 "Noise being the keyword"

"Explosions going off left, right and just about every-there, they made Motörhead sound about as loud a
grasshopper"

"With side one of this album they top everything they've spewed forth before with a truly terrifying 20 minute cocept-epic, a real 15 rounder. It will definitely go down in Heavy Metal history as the ultimate headbang" At War With Satan review by Garry Bushell (Sounds magazine April 1984) 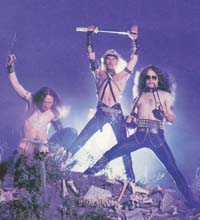 "This record is the absolute, no holds barred, complete and utter last word in total heavy metal"

"At War With Satan relayed over some really BIG speakers and directed at either Reagan or The Bear In The East would probably upset the balance of power once and for all."

"Proof positive that Venom are the best heavy metal band in the world. And no, you can't dance to it." At War With Satan review by Neil Jeffries Melody Maker April 1984)

"If you crave the heaviest power metal on vinyl, Venom is still where it's at. Venom is, as they always have been, molten hell, the way it was meant to be."
At War With Satan review by Bob Muldowney (Kick Ass magazine May 1984) 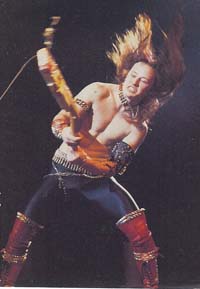 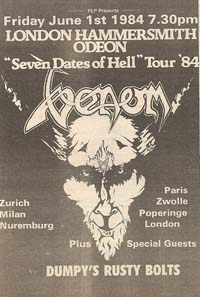 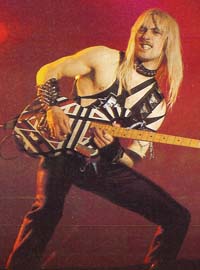 "The biggest drumkit I've ever seen"

"Each song was permeated with awesome amounts of sheer, staggering, senses-shattering total noise power, more than enough to make Motörhead sound like oldie-woldies"

"This band is so unique, so Goddamn menacing, that the next time I see 'em will be at Wembley Arena" Venom live at Hammersmith review by Geoff Barton (Kerrang! June 1984) 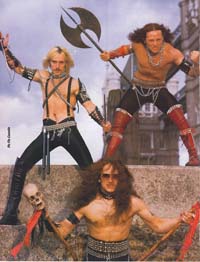 "I think we are a very difficult band to record live. It's like trying to record a train wreck!" Abaddon in interview with Dave Reynolds (Metal Forces September 1984)

"We have no competition really..."
Cronos in interview with Stefan Chirazi (Sounds magazine November 1984) 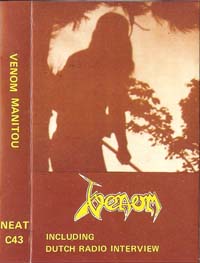 "Metal Opera with Cronos unleashing some fearful talk over as Abaddon let those 'Manitou feet' drums   grind you to a pulp! Venom have come up with a winner!"   Manitou review by Howard Johnson (Kerrang! December 1984) 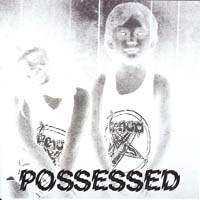 "Possessed has too many fine moments to note in a mere review. Just sit back and experience the most genuine metal mindfuckers around...and don't wear ear plugs!"
Possessed review by Stefan Chirazi (Sounds magazine March 1985)

"The power and the force of this band still bursting out of the speakers at the speed of light. All tracks are great and the closing Too Loud For The Crowd will have your ears bleeding for a week."
Possessed review by Mick Poulain (Cream March 1985) 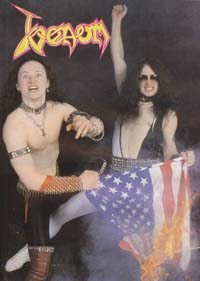 "I got into chicks really early. In fact, I screwed my first chick when I was ten years old in Junior School whilst in the craft room making a mosaic!"

"I don't preach Satanism, ocultism, witchcraft or anything - rock and roll is basically entertainment and that's as far as it goes"
Cronos in interview with Derek Oliver (Kerrang! May 1985)

"From Hell To The Unknown is a glorious burnt offering, a doubledecker from the fastfood emporiums of Hell"  FHTTU review by Laura Canyon (Kerrang! August 1985)

"Here is Venom at their roughest 'n' rawest, rudest and undoubtly crudest. You've got yourself one helluva collector's item"
FHTTU review by Stefan Chirazi(Sounds magazine August 1985) 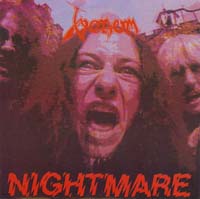 "Fuckin nowhere! This is the kind of shit that gives heavy rock a bad name."
Robbin Crosby from Ratt comments Venoms latest single in Kerrang! (September 1985) 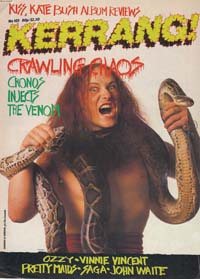 The way Venom go about it - it's like what Kiss lacked! You look at Simmons - and he was the demon! And there's fire and death...and they stands there going 'I was made for loving you, baby!' And you say, what the fuckin hell's this?! You can't sing about sheep and lovely daisy with - AAARRGGHH!!! - a thunderous bass line going on in the back and all these hellish drum fills!" Cronos on why the subjects of their lyrics

"Everybody goes to circus for one thing, maybe they don't like everything but they'll go for that one thing - and I think that's what we're like! People come to see us because somewhere in the show there's something they're going to like"
Abaddon about Venom live 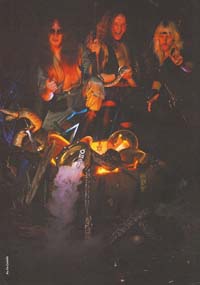 "I've got a little kid, and if he ever grows up and starts liking Boy George I'm gonna slap him senseless! If he ever goes out and comes home with make-up on he can fucking get out of the house"
Abaddon don't like Boy George

"Maybe they are going to be the biggest thing but to me they're the biggest boring pack of shits I've ever seen! They're really boring, they do nothing for me"
Cronos about U2
Interview excerpt from Kerang! September 1985 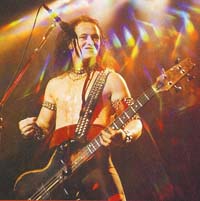 "The backdrop was naturally a picture of ol' Beelzebup himself looking proudly down in his most loyal servants"
Venom live at Hammersmith review by Xavier Russel (Kerrang! October 1985)

"Well I suppose it was half him and half us that got him out of the band. We wanted the band to progress but he didn't want to concentrate on playing live"

"The coming livealbum Eine Kleine Nactmusik is definately the end of the Mantas era now. We're putting all the old problems behind us. No matter what it costs we're gonna go out to be fuckin' huge again. We're really gonna create some big shit on stage. Now you will see real havoc" Cronos in interview with Mike Exley (Metal Forces October 1986) 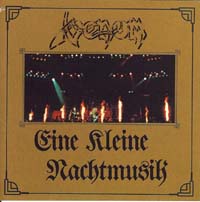 "It have some quite breathtaking moments, such as the cruelly rampant '7 Gates Of Hell', the near omnivorous tunefulness of 'Nightmare', the bloodletting showering inertia of 'Countess Bathory', the impaling cannon roar of 'Die Hard' and the necksnapping velocity 'Witching Hour'"
Eine Kleine Nachtmusik review by Malcolm Dome (Kerrang! December 1986)