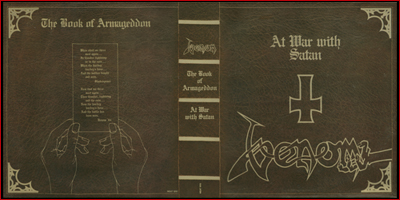 Some months before the famous concert at Hammersmith Odeon in 1984 Venom released their eagerly awaited third album At War With Satan. The band had worked three weeks in the studio and the production is sharper and cleaner than on the two previous albums. The upside-down cross on the cover combined with the albumtitle and it's contain where so controversially that England´s biggest recordchain at the time, HMV, choose not to offer the record in their shops. The albumtitle indicate that Venom takes us on an evil journey and I clearly remembered when I as a teenager listened to this album for the first time -it scared the living daylights out of me. At War With Satan is so palpably evil that even when it´s just sitting there on the shelf, in quiter moments you can hear the sobbing and wailing of doomed souls swimming in the lake of fire. They live in the grooves, see. Because if you´re gonna be Satanic, you might as well just burn the whole church down, while the congregation is still in it. At War With Satan could not possibly be any more demonic. Nor could it be any more sonically devastating than it already is. It is the Flash Metal equivalent of two-ton Nagasonic fizzing teenage warhead, only it´s payload is not death and destruction, but something far more vital - balls out, kill-devil metal.

The album kicks off with an epic metal monsterpiece, the almost 20 minutes long title track. This song blew me away first time I heard it and today I rank it as Venoms best track, ever. It brings everything that was great about the original Venom line-up: the thrashiness of Sons Of Satan, the ugliness of Warhead, the speed of Acid Queen and the dynamics of The Seven Gates Of Hell. The song is well structured and Cronos lyrics is amazing, interesting and twisted. Satan and his armies are getting ready to launch a full scale attack on Heaven and God, to try and take over. The guitar tone is thicker on this album and the drums are loud as hell, the way Mantas guitar plays through one speaker while Cronos bass plays through the other is a good effect. And above this Cronos is growling and spitting and screaming all manner of schizo-satanic gibberish, and laugh like a loon: "Are you damned in Hell? / Damned in Hell! / Lilith holds the black heart in her hands / The blood flows / Desecreation of God´s holy shrine / Armageddon / Hahahahahhahaha!". How can you argue with that? You just can´t. You just save your prayers and grab your cross, because the apocalypse has obviously arrived ahead of schedule. An amazingly totally enjojable song from first second to last with a mainriff that probably is one of the heaviest and most effective ever written....

The second side of the vinyl begins with the punky Rip Ride, classic Venom, great riffs, quick drumming and Cronos superbly delivered vocals. Cronos bass gallops madly on next track Genocide, whose three minutes would have fit in nicely somewhere in the titletrack. Cry Wolf begins calmly but fast move into a higher gear. The track is about werewolves, whick always gives plus points. Next song Stand Up And Be Counted was written with Venoms Legions in mind, very uplifting indeed. With Women, Leather And Hell we are once more back in the punkier territory. Fast and brutal. Remarkable track. And the last track Aaaaaarrghh is not really a song, but some kind of alcohol induced frenzied excercise of the band playing chaotic nonsense, everone shouting and screaming incoherently. and other assorted noises...they even stop things for a moment so someone can bang some slovenly chords on a piano. Venom have a sense of humour that´s unparalelled in extreme metal, and it´s part of the reason I love them so much. They are so nasty, so over the top, and so damn fun to listen to.

In conclusion, a tremendous album filled with rip-roaring evil thrash anthems. Bang your head, pump your fists and play loud!