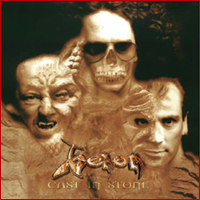 In what was not just the album of the year 1997 but perhaps the comeback album of the decade, the original Venom line up of Cronos, Mantas and Abaddon made their first album together since 1985. Retaining the roughness and chaos of old while bringing contemporary flavour and production to the table, Venom cleared the decks with riffs and songs that most band would kill for.
What Venom did come up with was an album that did build on the past, acknowledge the present and looked to the future. With Cast In Stone they did struck the perfect balance, remaining true to the original mould while simultaneously sounding contemporary enough to be able to hold their heads high in the late -90’s. Most importantly, they did come up with the songs. And that’s what Venom has always been about.
The Evil One is the perfect opener. A big, fat bass groove underscores a lead riff so infectious that air guitaring is instinctive and headbanging unavoidable. It is followed by the ultrafast Raised In Hell with a great chanted refrain. And – the dervish riff will slice your head clean off. One of the greatest songs the band has ever recorded.
All Devil’s Eve keep up the excellent standard and is a reminiscent of old Venom. Watch out
for Mantas guitar on this song, it sounds like a massive freight train coming at you. The bone splintering heaviness of Bleeding is next up before Destroyed And Damned starts out…quite different. It has some emotive guitar work with some sombre spoken word part. It seems almost like a ballad until about 2 minutes into it and it becomes an extremely heavy slow song. Domus Mundi is an experimental song. This time it has the band experiment with industrial sounds. This is the result of Abaddon (he actually remade the song for his industrial 2000 solo album I Am Legion, except the song was re-titled Hollow Voices). This is the only weak song on the album and no doubt most Venom fans will be left scratching their heads).
The death-metal-tinged devastating Flight Of The Hydra is arguably the most brutal song the band have ever recorded. Naturally it is great stomp and thrash. Lovely! The dangerously catchy Kings Of Evil has a great riff that kicks ass as well. Almost every track has it´s own merits and even lesser known numbers like Mortals, Judgement Day and Infectious feels like old friends. You´re All Gonna Die is a song which tells us that, no matter who you are or how important you think you are, you´re still gonna take a dirt nap someday. The last song, Swarm,  is one quite odd number and a proof of the albums diversity. It is Abaddons song and some weird electronics is thrown in. Not a favourite but it ends with a neat little bit of minimalistic, atmospheric bass and guitar work.
The individual performances are flawless. Abaddon pounds the living daylight out of his kit, Mantas shines throughout, riffs shredding, solos burning, and Cronos vocals are absolutely spot on. The production, too, is nigh on immaculate and considerably enhances all four elements of the sound. The drums are massive, the guitar razor sharp, the bass immense and the vocals mixes at just the right level – loud as hell.
In my opinion this album is nearly perfect and I have listen to this vinyl/CD a couple of hundred times and I will listen to it at least once a month for the rest of my life…It is that good.