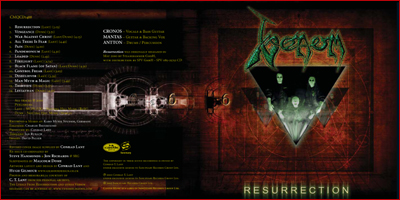 First released in 2000, Resurrection was Venom’s first album to feature Cronos’ brother, Antony "Antton" Lant on drums. As the title suggests, the band are revitalized with renewed vigour and an across the board production that improves with every increased turn of the volume. A cohesive and even release with well-balanced tempo’s ranging from fast and frantic to slow and brooding, all delivered with a musicianship that is psychotically crisp. The guitars sound amazing and the vocals are crisp and clear. Antton's drumming is phenomenal and really adds to the sound of Venom.
The production work of Charlie Bauernfeind is simply amazing. He's preserved Mantas' shredding guitar sound and Cronos' bulldozer bass in their primitive early '80s form, but made them sound crisp, powerful, huge, huge and huge again. The album is packed with thick potent guitar riffs and powerful vocal arrangements. It strays away from the stark rawness typical of earlier material, but make no mistake, this more sophisticated sound is every bit as brutal.
The openers Resurrection and Vengeance immediately define what Venom 2000 was all about: simplicity, brutality, drive and the use of massive headbanger-friendly powerchords, with Cronos' trademark nasty snarl on top of that. Resurrection is actually a slower (for Venom anyway) slower, simpler track with a very aggressive guitar work. It's just evil sounding proving that you don't have to be fast to produce the most evil music. Vengeance is one angry rocker. Total Mantas lyrics here! If you ever get in a conflict with anyone, put this track on, it’s guaranteed to make you hate that person 10 times more! Also Cronos says one of the meanest "fuck you’s in song history towards the end of the track. Great speed picking and palm muted power chords.
War Against Christ, which contains a lot of tempo changes and has kind of "angelic" (for lack of a better word) backing vocals that create a great effect, is the power of Venom in it’s most blatant salute to Satan. All There Is Fear is another slower track with complex structure and composition. It has a great bouncing rhythm. A “hate” monster much like Vengeance is Pain that continue the album with another bad-ass riff. Many of the songs are memorable because of the awesome (albeit generic) riffs. Nothing in this album is uncontrolled, which is strange....for Venom. Pandemonium is typical for this.
Loaded is fast, sloppy and heavy as fuck. Reminds me of old Venom. Really powerful is Firelight that has a synthesiser intro then goes straight into a very ambient black metal song, with the sustaining power chords and Antton’s drumming being fast and well co-ordinated. Yet another straight ahead killer riff with a dark menacing, downright evil lyrics is to be find on the pounding (Black Flame) Of Satan. One of the best tunes on the album.
Control Freak is most memorable for Anttons wicked drum licks before a new metallic cannon hits you in form of Disbeliever. Mantas really sets fire to his fret board on this track. It’s great! I love this one! It’s aggressive and fast paced with serious attitude with a bit of crowd noise before the bridge. Man, Myth & Magic is a great violent song with a very ambient feel. This could be the song for the apocalypse. Venom has hardly never sounded more musically muscular than here.
Thirteen is the thirteenth track and it’s furious and dominating. Cronos screams and yells like a demon with a leg cut off, Mantas does the usual fantastic riffing and Antton keeps everyone in time, but it’s the pure heart felt aggression that stands out from this track. Kick ass song. The album closes with the slower Leviathan that has Cronos singing in a less harsh and violent way with a deeper growl of menacing to it, and it really works.
Resurrection did satisfy the loyal followers whilst drawing-in new believers to the Legions. A headlinerconcert at Wacken in the summer and a surprise show in Holland in October followed. But unfortunately, not long after this a near crippling climbing accident put Cronos out of action, just when the band seemed ready to take things to a new level. We will probably never hear another album with the two strong personality of Cronos and Mantas working together, which is a great loss. When listen to this amazing album you really wonder what these two together with Antton could have achieved. One thing is for sure this line-up never reached it’s full potential. That would have been world domination