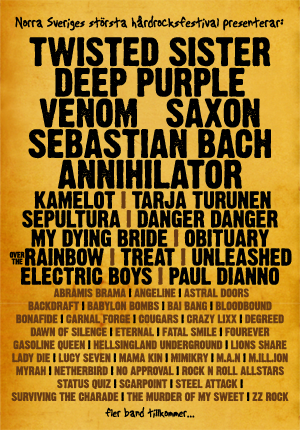 Same date, same target, almost at the same place. Rockweekend and Getaway are just around 80 km from each other. A real tough competetion and it looks like Rockweekend draw the shortest straw. Around 7000 had bought tickets for the festival which were half the number of their antagonist. And I wonder if it will returns next year. My impression was not overwhelming. By far the most disorganized festival I have ever attended. Too much to bother.

But Venom have always known how to deliver the goods, even in tricky circumstances. Cronos was apparently furious at the on-stage sound girl(!) who kept fucking with the sound, and making it impossibe for the band to hear each other, and also forcing Venom to cut the set. But this didn't affect the Legions that enjojed the show to the maximum.

Cronos, red boots and all, has still got it - in spades - and rolls back the years with a blistering display, 7 Gates Of Hell, Countess Bathory, Warhead...it's awesome to hear these old stingers delivered with power, passsion and crdibility. Cronos is as awesome as he ever was back in the day. He's still effortlessly the coolest motherfucker in the game. Black Metal kicked off a night of fist-pumping metal and sounded still like the metal classic it's been the past 28 years, brutal and intense.. The breakneck velocity of Antechrist follows and is nothing but stunning when you hear an ultra-fast liveversion of it. Released just four years ago and already a Venomclassic that feels like a must in the setlist.

Talking about classics, Welcome To Hell was dropped from the set a few gigs back, but to my relief it is played again. Now in a superb medley together with Straight To Hell from their latest album. The new blood in Venom, drummer Danté burns the calories from start, like a supercharged Muppet behind the kit and pouring with sweat. He's got speed and precision. Bloodlust sounds better than ever with him behind the drums. A real find he his.

The band feel tighter and more united. I really hope this line-up will last. Guitarist Rage is especially on fire, interacting with the audience in a manner that shows that he really enjoj this. Replacing the legendary Mantas is not easy, he could never fill that space. It's like when you get married and have kids, no one can take your fathers place. Of course, some other guy could have taken his place, but he wouldn't have been your father, so Rage could never be Mantas, so he had to introduce Rage into Venom. And now I feel like he has stamped his personality on the band. He switches impressively from riffs to solos with aplomb and are absolutely more energetic and expressive than his predecessor Mykus.

Throughout the Medley Of Mayhem, the band scattered also a few golden oldies around, and apart from the fact that they perhaps don't have the character of the classics, the invigorated takes on Calm Before The Storm, Live Like an Angel and Krackin' Up are ferocious songs blending classic metal with hardcore punk's single minded determination. Worth mention is also the speed of Live Like An Angel, at least twice as fast as the original version. Surprisingly, Hell, the titletrack of their 2008 album was one of the set's highlights and the way it was delivered back to back with 7 Gates Of Hell was sheer awesomeness. Another highlight was when the trio tackled the conceptual opus about the battle of Armageddon, At War With Satan, this time with parts of Rip Ride (last played 1984). Great!

Before the double-assault encores of In League With Satan and Witching Hour the band explodes in the blitzkrieg attack of Metal Black.  On this track they sounded like an oiled killing machine. Definitely a favourite Venomtrack if you ask me.

All in all, Venom are still a bad-ass live act, an example of dedication and no nonsense-attitude. Let's hope they make a returnvisit to Swedish shores soon again and tear things up once again.. Thirty years young and still going strong. Fuck "too old", fuck "beginners", fuck "nu-metal", there's not a single thing mellowing on Planet Venom.

In League with Satan
Witching Hour