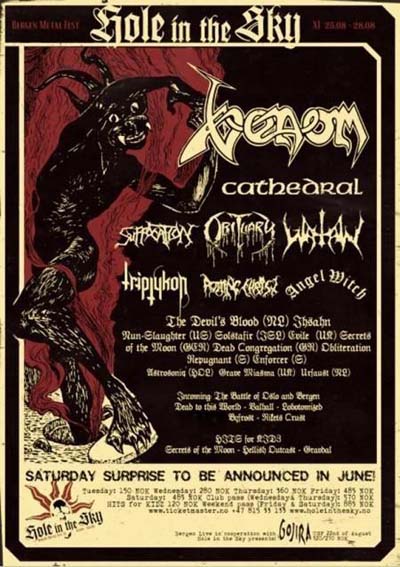 It's the third night of the Hole In The Sky Festival in Bergen and judging by the myriad of Venomshirts and talk between people, everyone is here for Venom. Some of them here were clearly there in the 1980s, others are new to the experience.  Back then, Venom lean on a spectacular visual arsenal to carry the show; here they do exactly the very opposite. It´s all about the songs. And - the ridiculously overcrowded and sweaty USF Verftet, uncomfortable though it is, is probably the best place to experience Venom alive, who really thriving in the in-your-face environment. The pitch is black, the time is past witching hour and the expectations are high.

The band are introduced with the famous introtape "Ladies And Gentlemen, from the very dephts of hell....Venom", before they launched into blistering opener Black Metal.  As an opener it's unsurpassed,  perfect, not just the titletrack of their most famous album but also the song that coining the genre name that without this very festival would not even exist.  A brutal, ballsy, feedbackstrewn statement of intent that is followed by a savage version of Antechrist which really attract the rows of headbangers. Guitarist Rage finger-bending bravado kick off Straight To Hell in a medley with Welcome To Hell, the 1981 title-track foot-stomper are guaranteed to get every old-schooler going crazy.

The energy level in the venue rises as the band and audience feed of each other. A crowd pleasing Venom is rolling out the heavy artillery of Don´t Burn The Witch, In Nomine Satanas and 1000 Days In Sodom. Nothing short of brilliant. The band is in excellent shape.  Cronos, possesses more charisma in his little finger than all the other Evil Elvis wannabes out there. A truly resistless performer with his rasp is in excellent form. Holding the entire audience in the palm of his hand as guitarist Rage beat them into abject submission with unrelenting barrage of grievous bodliy riffage and extreme sonic belligerence. He has transformed himself to a perfect sidekick to Count Cronos. Energetic and confident he constantly succeed in stamping authority upon all old classics.

The march through storming numbers is relieved by the epic 7 Gates Of Hell and a thunderous Hell. Drummer Danté could walk into just about any Premier League metal band right now, he his pounding away at his kit and with two cymbals 15 feet up in the air he is working like hell. Sure, one of the most entertaining and best drummer today.

Venom are like a brutal weapon; set to kill, the band is a lethal force. And watching them here in front of an enthusiastic and knowing audience they deliver even more energetic passion and infectious intensity.  A consistent force to be reckoned with. And it´s this consistency that allows them to deviate from the expected "All Greatest Hits" set and play unusual tracks such as Calm Before The Storm and Krackin' Up (both parts of the Medley de Mayhem 1) without losing momentum.

At War With Satan is greeted with huge roars of approval, followed by the popular crowd sing-along Burn In Hell.  The claustrophobia of Buried Alive shows that metal bands can do slower stuf without it being completely lame. And then on to a complete surprise - Man, Myth & Magic. Rather disappointingly it doesn´t get the raucous cheer it deserves - only a handful fists refraining to chorus - but that´s more to do with the fact that this track never featured in any Venom setlist before. With a steely intent and a gritty determination Venom complete Medley de Mayhem 2 with Resurrection and The Evil One.

The event - and that what it is - climaxes with a double punch from the debutalbum, as In Leage With Satan gives away to Witching Hour, raising everything to a new level of hysteria. If it wasn't for the absurd curfew law Venom would have played five more songs in the set and made it the longest Venomgig ever, if so it would have been an all-time classic, now it just ended up being the gig of the year.

Venom, tonight they slayed and retained their throne. Godfathers of black metal, long may they reign.