Here's the story of this legendary night for all you uneducated kids:
This first and absolutely legendary “Black Metal Night” was organised by Matthias Prill, who was head of the german VENOM'S LEGIONS back in the day. For this first LEGIONS meeting he booked SODOM and TANKARD, who were back then total underground bands, only known in hard-core tape-trading circles. SODOM played with their legendary
“Sign of Evil” line-up that featured the new guitarist GRAVE VIOLATOR, after legendary BLOODY MONSTER and AGGRESSOR of the first SODOM line-up had left the band.

The South-German Black Metal maniacs DESTRUCTION also made the trip up to Frankfurt to make their first contact with the scene and ended up on the stage in front of the crazy metal crowd. Besides this monster bill VENOM were invited for a meet & greet (that girly term wasn't used back in 1984) with their dedicated fans. With this first SODOM show ever the band got signed to SPV/DEVIL'S GAME, which led to the release of the groundbreaking and legendary “Sign of Evil“ MLP, which is still an enormous influence for tons of Black Metal musicians worldwide.
The lunatics of DESTRUCTION attended this cult event in full hardcore metal gear and played 3 songs with borrowed instruments for the few hundred fanatic bangers and thrashers from all over Germany and also secured a SPV deal for their legendary “Sentence of death” MLP that night.
If you already think this is a BIG story, fasten your seatbelts for the even more L-E-G-E-N-D-A-R-Y part of the story why only 2/3 of VENOM made it to the meeting and were unable to sign the poster and photo:
MANTAS (VENOM guitarist) wasn't able to make it to the “Black Metal Night“ meeting, as a few days earlier CRONOS hat gotten into a heated argument with a dutch radio-DJ - legend has it that not just the studio equipment was damaged. Dutch police confiscated the passports of all VENOM members, but the adventurous and bold CRONOS and
ABADDON knew that they owed A LOT to the german LEGIONS and just got onto the train to Frankfurt  and hid away in the train toilets when they crossed the Dutch-German border. 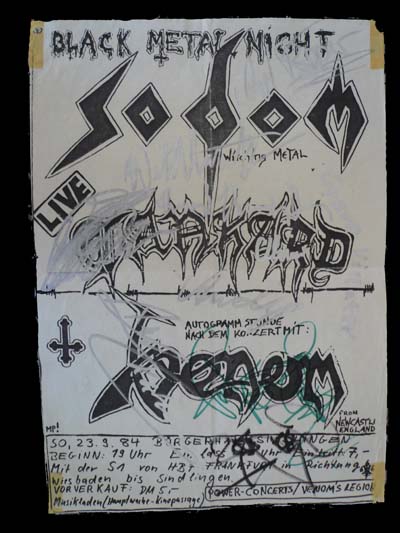