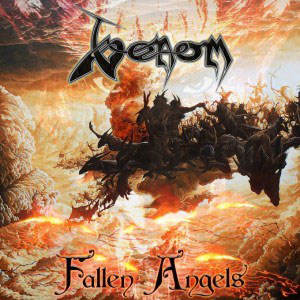 It's finally upon us. After months of waiting, colossal black metal band Venom has finally released their new album, Fallen Angels. Cronos and crew open things off with a cocksure, fist-pumping Hammerhead, powerful and heavy. Already a new Venom-classic to my ears. The lines “Black Metal In Your Souls” and the chorus “Hammerhead – Hammerhead – Headbanger – Headbanger” should make sure this to be the bands new metal anthem. From the very first note to the closing titletrack, Fallen Angels is non-stop metal mastery. Even the less memorable moments, the few that exist, are still of the highest caliber where this brand of metal is concerned. In many ways the album harkens back to the days of Black Metal and Possessed yet remains consistent with the more modern approach taken on later efforts.
The band sounds confident and focused and this is an attitude they never drop throughout the album. One thing that strikes me immediately is the great production. Very clean but raw. Back to the roots, not overproduced like many modern metalalbums are today. Just phenomenal. Sounds absolutely crushing. Of course, when you think about Venom, the first thing that comes to mind is the name Cronos. The years haven't dulled Cronos razor-sharp tongue a bit; if anything his vocal venom is more potent than ever. One of metal's all-time greats, Cronos trademark snarl and penchant for creating infectious vocal hooks are the frosting on this concrete-baked cake. Hell, we even get a bit of Welcome To Hell era screams and wails scattered throughout the album's 13 tracks. Just listen to the kick ass song Pedal To The Metal and you hear what I mean. Back this up with some awesome talent from Rage on guitar and Dante on drums and you have the ultimate Black Metal power trio ready and primed to lay waste to the musical landscape.
Though Fallen Angels is not without its standout cuts, there is a real "album" quality to this one. Every single track is strong. No fillermaterial at all. The notables are many though, including the aforementioned Hammerhead and Pedal To The Metal. As well Nemesis with its absolutely hellish, old school thrash lick. That's no lie; the damn thing burns so hot you'll swear you smelled smoke. The strong groove track Beggarman and the black metal roots in Hail Satanas.
Add to that list the memorably written titletrack at the very end – a heavy, viscous number that after a long bassintroduction really get moving. A very powerful finale.
Some of the songs on the previous two albums Metal Black and Hell did tend to get repetitive. This album is something completely different, as songs changes tempo and riffs very often. One clear example is Lap Of The Goods with a great break in the middle of the song.
So Fallen Angels has a good bit of variation, to a certain extent. I mean, it's all in the context of Venom but they kind of explore everything the band has dipped their glorious fingers into over the course of their 30 year career. You have the epic (Fallen Angels), the thrash (Nemesis), The heavy/doom (Hammerhead), and the modern/groove (Lap Of The Gods) and even the early years-era hardcore-ish (Punk´s Not Dead). This album is a Venom diehard's wet dream. It has everything. Compared to the albums since the re-start of the band in 2006 it sounds better. It has more energy, more vibe. There´s more craft to it, stronger songs and an evidence they´re still head-and-shoulders above the many young pretenders they spawned.
What we get is pure Venom-metal, served up with an additional side order of exemplary songwriting and an attention to detail and choruses that I haven’t heard from Venom since the mid 1980s. It is right up there with their very best records. Yes, it is. The band´s first four albums have become so universal and iconic that it seems pointless to use them as benchmarks by which to assess anything that followed. Take them out of the equation, though, and Fallen Angels is unquestionably the best of the rest.