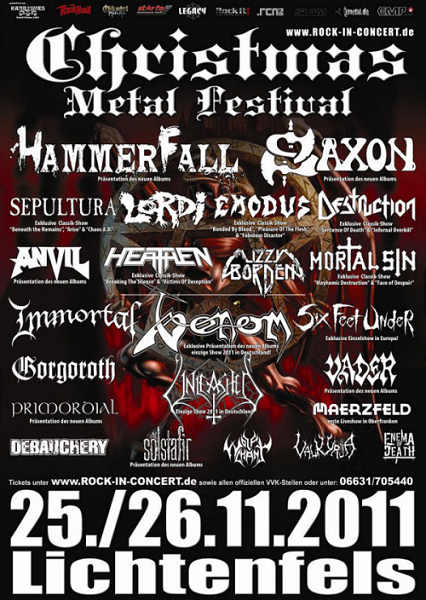 There were other bands playing toníght, and, on any other night you would probably care. The death metal veterans Unleashed, for instance, proved that they are still capable to slaughter with their music and Immortal, geared up in full armor and corpse paint, Abbath, Apollyon and Horgh have a real dynamic and baronial stage presence, a really crystal clear sound as their ally and put on an immensely entertaining show with lots of pyros and fireworks that the Black metallers inside the venue enjoyed a lot. But, Venom are Venom, and this was the most anticipated gig of the year for me. That’s all the intro you need.
By the end of the evening, past witching hour, headliner and closer Venom reawakened the dead and absolutely destroyed any competition earlier on the final day of Christmas Metal Festival in Lichtenfels
They began with a storming Black Metal, following with a brilliant medley of incredibly evocative renditions of Straight To Hell, Calm Before The Storm, Resurrection, Krackin Up,The Evil One and Welcome To Hell. By this time, they could do no wrong as far as I (and many others) was concerned. Welcome To Hell is one of the best metal tracks ever made, and live it just blows me away. Every time.
Stringing together classics like At War With Satan, Too Loud For The Crowd, Rip Ride and Nightmare along with the new superb material from the Fallen Angels album, they simply couldn´t lose. The band´s mere physical presence at the stage was enough for many, but songs like Countess Bathory and 7 Gates Of Hell have not become genre standards for nothing.
Basist/vocalist Cronos is a truly fascinating individual. He totally owns the stage and as the music begins he grinds his mane wildly in time with each savage riff and spits forth the lyrics like a demented werewolf on Viagra. Accompanying Cronos at the lip of the stage, guitarist Rage alternate between chainsaw solos and rhythmic parts. Crucially, drummer Dante just gets better and better with each performance.
At the end they power into a maniac Pedal To The Metal unleashing In League With Satan hot on it´s heels, and proving that the old guards are still a match for anything the new wave can produce
And in case you´re wondering, good doesn´t even come close. Good is an insult. Sure, it may not be the original line-up, guitarist Mantas having moved on ages ago, his sizable boots being filled by Rage, and if you have heard their latest opus Fallen Angels you know that this line-up means business. Venom has advanced with respect of the past and an eye for the present. Venom isn´t just good, it´s sort of show that makes everything within a thousand mile radius of it, completely pointless. Lichtenfels – there is no better place on earth than here right now. Mag-fucking-nificent!
The crowning moment of a brilliant gig is when the band close proceedings with Witching Hour, that´s an epic ending to an epic night.
Can´t wait ´til next assault…..

Pedal To The Metal
In League with Satan
Witching Hour

BACK TO MY LIVE REVIEWS