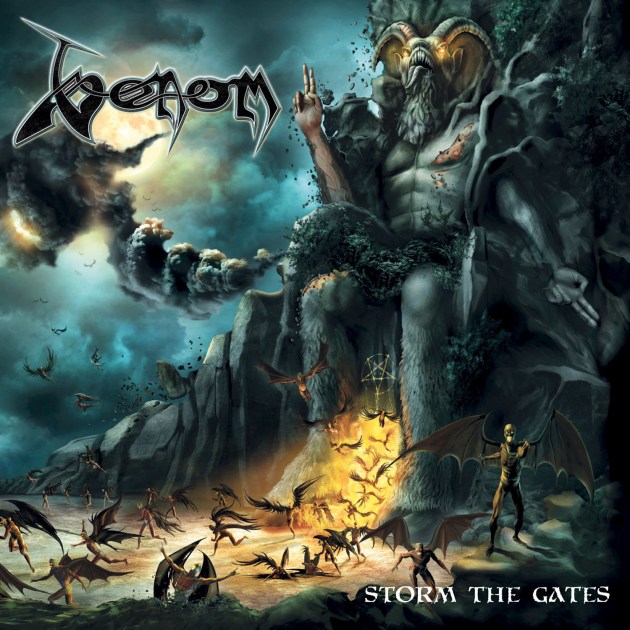 If “Fallen Angels” and “From The Very Depths” were going places, “Storm The Gates” has them arriving, alive ´n´kicking ass. This is an armour-plated symphony of matchless brilliance, blood-lust, belligerence battle-thirst.

So, you thought Venom lives on old merits? Forget it, dummy. If “Storm the Gates” proves anything, it´s this, - Black Metals finest outgun and outflank most of the competition out there.

“Bring Out Your Dead” sets the blistering pace and none of the succeeding twelve numbers fall by the wayside of the journey.

The album possesses an unpolished, old-school sound that´s a tribute to Cronos production. The previous two albums had been a slight departure. Here we hear a return to Venom’s original approach with big-time aggression and more punky style. The production is surely going to be a divisive factor, as there's a rawness that's almost unheard of in the metal scene of 2018. The sheer amount of distortion, clipping and reverb drenched over the entire record is in My ears amazing and it does give the album a character that's sorely lacking in the metal scene's surgically clean productions these days.

Built on a foundation of bruising rhythms from drummer Dante (compared to this monumental of muscular menance, most others is skinbeatings midgets) the numbers stalks and prowls with an intense rage.

Most songs are driven by his vehement and fast-paced drumming. "Destroyer" is the exception to the rule. This slow-moving tune possessed a demonic aura as well as an intensive and dramatic ending. It is therefore a relatively unusual sample of the band´s work, but nevertheless one very interesting track of the album. Its doomy heaviness definitely leave it’s mark.

You will find hints of previous Venomclassics (“Antechrist” and “Metal Black” from the “Metal Black” set comes to mind) herein, but the overwhelming impression is of a band who have the confidence and capacity to draw from the wellsprings of their past, without sounding repetitive.

”Suffering Dictates” is a gem. With a wicked-laden intro and an unrelentong overall sound That combines new and old elements. Cronos vocals is back to its measured shout from the early 80’s on this one. Think ”Lady Lust” or ”Senile Decay”. The song accelerates to a maximum headspinning tempo after the last line.

Rage intense and mesmeric guitars are not to be forgotten. He’s now thrown off the New guys togs to reveal That underneath it all lurks a fresh emperor of the axe attack. He unleashes here some of the most inspired fret-board walks this side of the millenium.

And, of course riding high over the instrumental thunder is the voice of that ultimate roar addict, Cronos, you can almost feel his veins bulging as he snaps his ways through lyrics as "I walk the left-hand path/Chaos is my name/The son of armageddon/Danger's in my veins".

Venom stay true to their DNA, to the structure of the songwriting, to their roots. But this time there are more of variation. The tracks here alternate between all manner of genres, from punk, to speed metal, to the darker side of black metal and even death metal,

”We The Loud”, heard first time on the ”100 Miles To Hell” EP is another winner and one that will sends Venom crowds delerious when hearing its intro. From it’s clever introduction with maximum bass via the wasp-in-a-bottle solos through to the slow, almost doom-metal ending, the song is superb. The aforementioned ”100 Miles To Hell” (here slightly reworked) is a groovy midtempo classic Venom track with some familiar satanic lines in the lyrics. And the furious “Beaten To A Pulp” attacks you with its intense and original guitar lines. The massive guitar chords is awesome and really haunting. Some of Rage's best work ever. Spellbinding tone he got on this one!

And just when you think You’ve heard it all comes a double breathtaking knockout punch, ”The Mighty Have Fallen” and ”Over My Dead Body”. A crashchord canticle, this is pyromania raised to genocide. Bringing back reminders of the fastest songs in their catalouge. If this two doesn’t kill you Stone dead, Then you were probably a corpse before you switched on the stereo.

As a follow up to the extremely impressive last two albums, it’s fully living up to the expectations. I can’t conceive that any Legions is going to be disappointed.