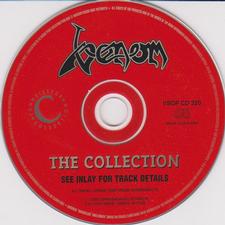 Notes: 18 tracks collection with songs from the era with Tony Dolan. 14 tracks from the threestudioalbums plus
four tracks re-recorded from "Welcome To Hell" & "Black Metal"

A TRIPLE DOSE OF VENOM 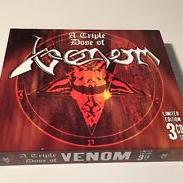 Notes:
3-CD Boxset with "Calm Before The Storm" and "Eine Kleine Nachtmusik"

IN LEAUGE WITH SATAN

Notes: 32 tracks collection with songs from the era with Tony Dolan. CD1 with tracks from the three studioalbums.
CD2 with re-recorded classics previously released.

LAY DOWN YOUR SOUL

Notes:
Contains unreleased studio rehearsals recorded 1991 - 1993, during the "Prime Evil" & "Temples of Ice" gigs.
These unheard studio sessions see the band experimenting with songs from the bands entire back catalouge,
some of which never actually made it onto the live sets of the gigs