Brighten up the festive period with this classic piece of attire, and have
a jolly olde Venomous Black Fucking Xmas, Hell Yeah! 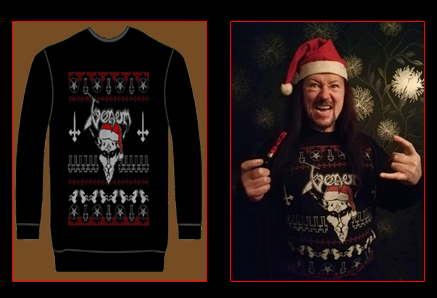 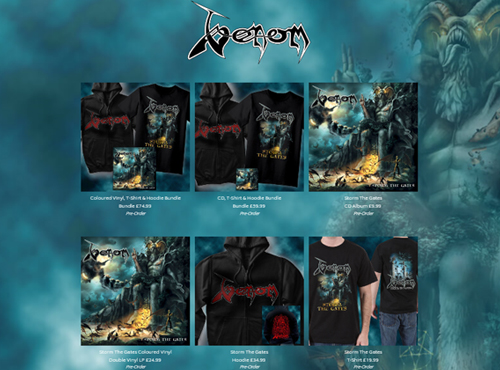 Visit the store website via the link below for more information. PRE-ORDER NEW VENOM HERE 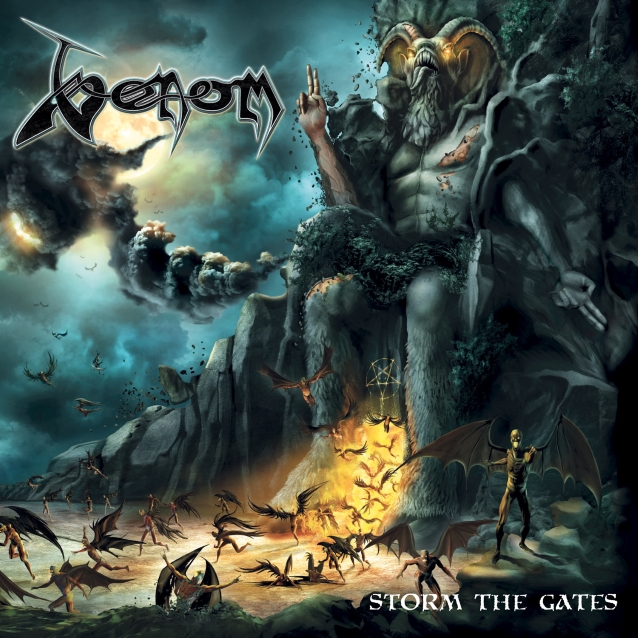 We are happy to announce that Venom will now be appearing live at the
Tecate Metal Fest in Monterrey Mexico on 6 October 2018.

The management & promoters have been working around the clock to find
a way to address the issues that unexpectedly arose, which put the concert
at risk, although a solution has finally been found to everyone's satisfaction.

We would like to apologies for any inconvenience, & hope the fans who were
planning to travel to the event can still make their journey, and the fans who
already bought tickets enjoy a great show. 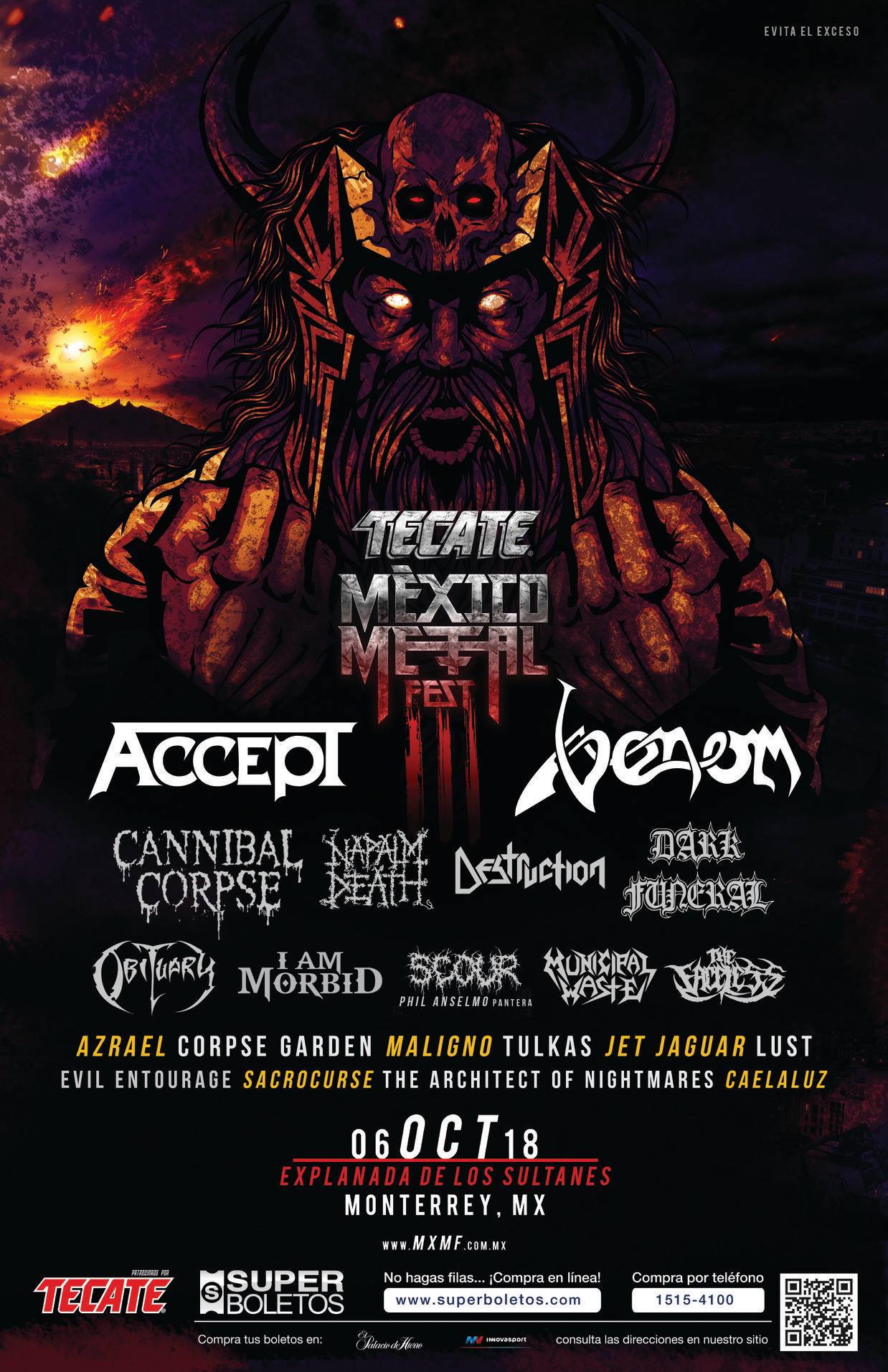 It is with deep regret that today we have to announce that Venom will not be
appearing at the Tecate Metal Fest in Monterrey Mexico, due to a breach of
contract by the promoter. The members of Venom & their crew are very
unhappy about this situation, as a lot of work & expense has went into
preparing for this show & they are deeply disappointed especially for
the Legions who were all looking forward to seeing Venom live.

The band and management want the fans to know that this matter
has been completely out of their control. 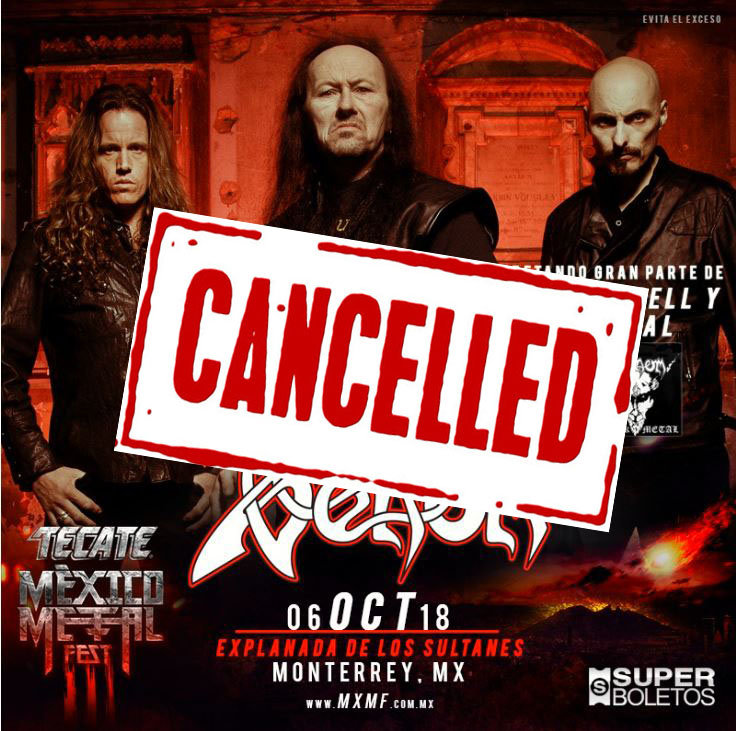 The new Venom album is set for release at the end of 2018. Entitled Storm The Gates,
the new album will be released in December 2018 by Spinefarm Records/UMG in CD
format, with other formats of Vinyl and Cassette coming out in the new year.

Cronos quoted: "Get ready for another killer album, packed full of awesome riffs &
screaming mayhem. We´ve been hard at work for over two years to make sure this
new album release raises the bar, to deliver a demonic mix of old & new. I´m
hoping to talk the label into a xmas day release date, yo fucking ho, hell yeah.
Further release information coming soon 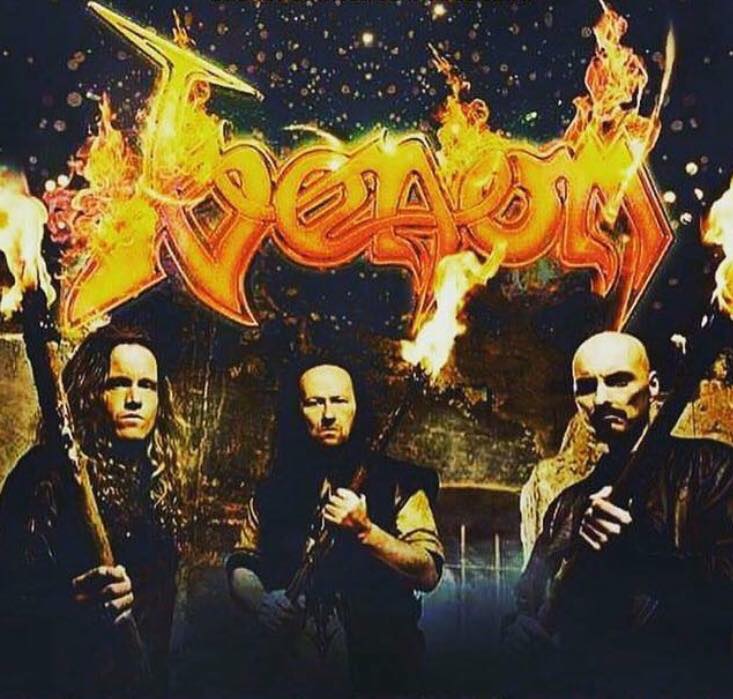 Venom have confirmed they will be returning to Mexico on 6 October 2018, where they
will again be headlining the Tecate Mexico Metal Fest for the second time.
"We had an amazing time in Mexico last time we played there says Rage.
"We can´t wait to return with a killer show for the hardcore Mexican Legions"
TECATE MEXICO METAL FEST HOMEPAGE 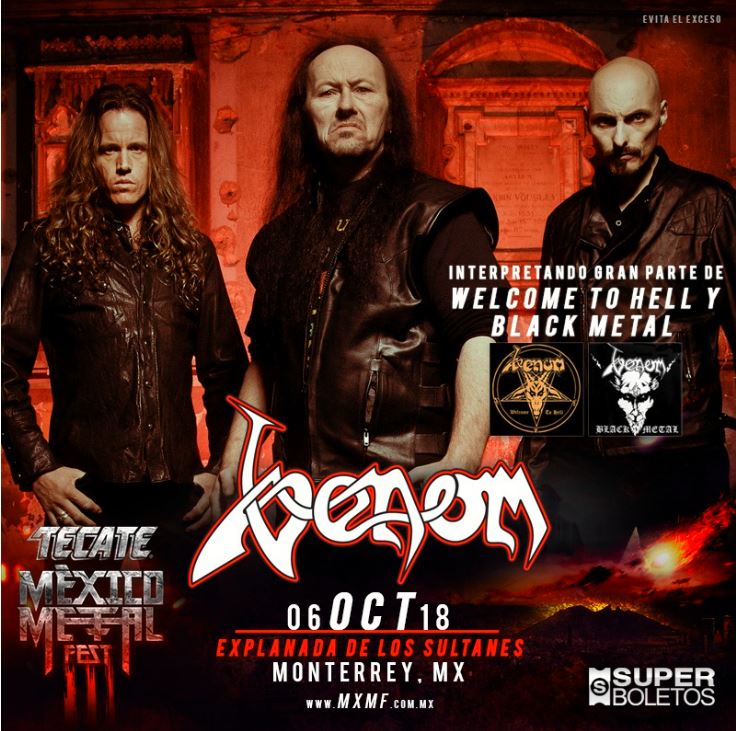 The promoter of the Colony Summer Festival in Italy has released a statement to announce
that this years festival has unfortunately been cancelled. Venom are very disappointed and
were looking forward to returning to Italy, and hope they can organise another show for
their Italian Legions soon. We will return! Stay wild Legions.
COLONY FESTIVAL HOMEPAGE

Dante is still undergoing treatment for his injury from May, and with a recent stay in hospital following his operation, the band were nearly forced to cancel the rest of their upcoming shows for 2018. Fortunately Dante's tech, The Jackal, offered to save the shows for the Legions, so Venom could headline the Gefle Metal Festival in Sweden on Friday 13th July. The show was fantastic and the Legions gavve him a warm welcome. The doctors have not given an exact date to when Dante can begin playing again, so The Jackal will be standing in for the upcoming shows. 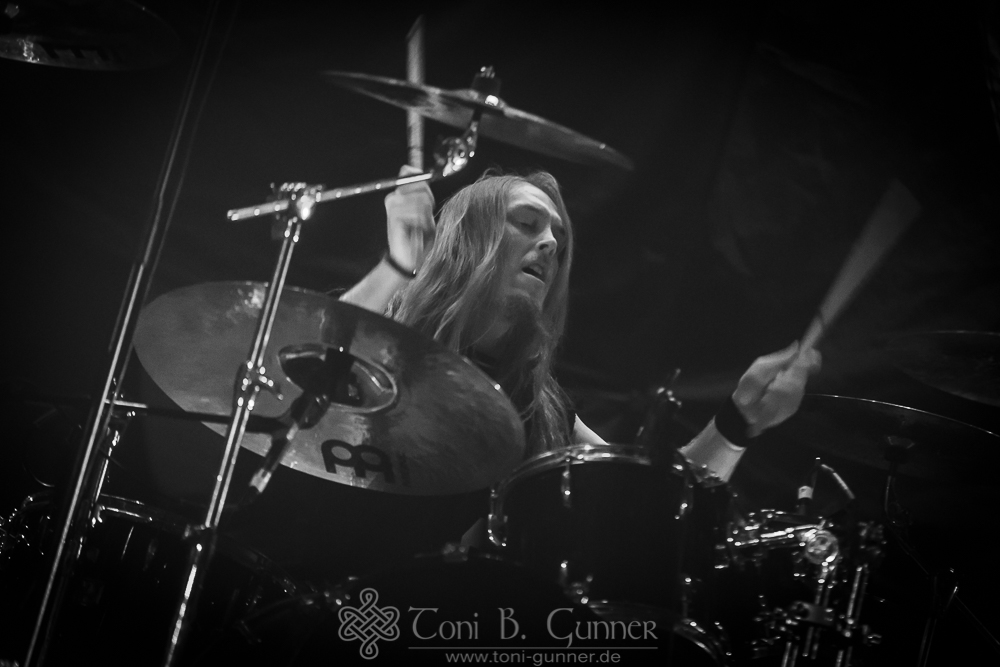 Venom´s management have released a statement announcing that Venom will not be playing
live on 14 June 2018 at this years AMNESIA ROCKFEST in Montebello, Canada, as Dante
has suffered injuries after an accident. He is currently receiving treatment and will
be undergoing physiotherapy over the coming weeks. We all hope this will not affect
Venom´s other summer festivals and are all wishing him a speedy recovery.
Venom wish to apologise to their fans. Get well soon Dante. 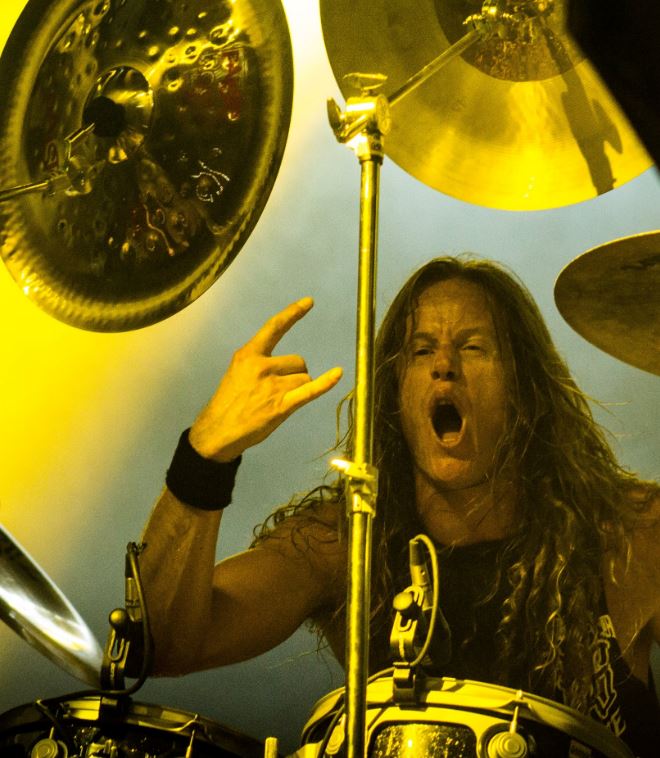 LEAVE ME IN GERMANY

Germany will see the second coming of Venom this year in 2018, as the band have just
announced that they will be headlining this years RUHRPOTT METAL MEETING on
7 December 2018. Get ready for another glorious Black Xmas of metal festivities. 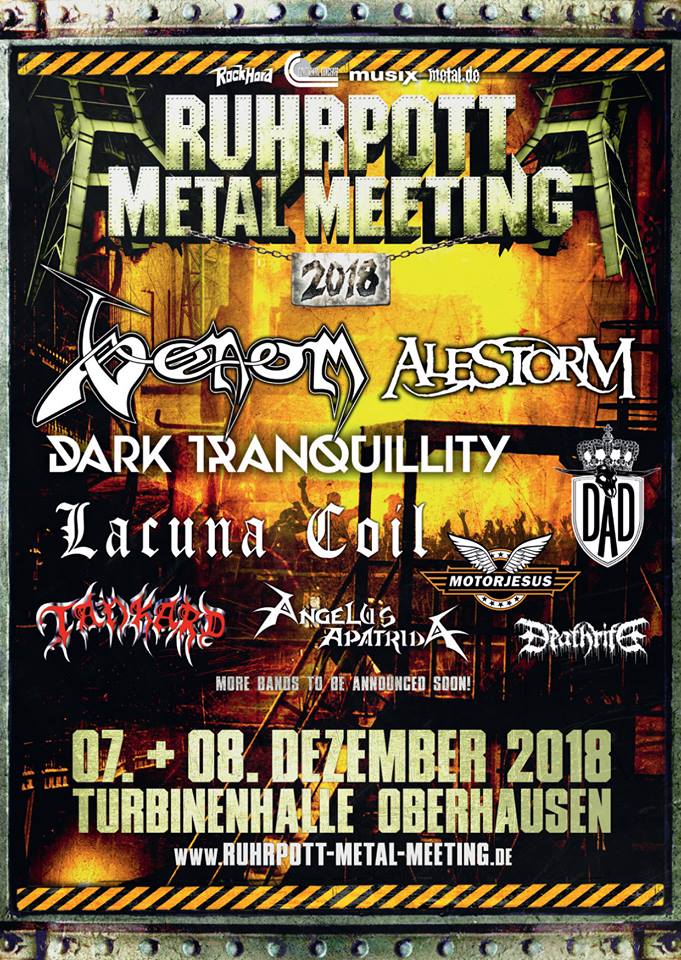 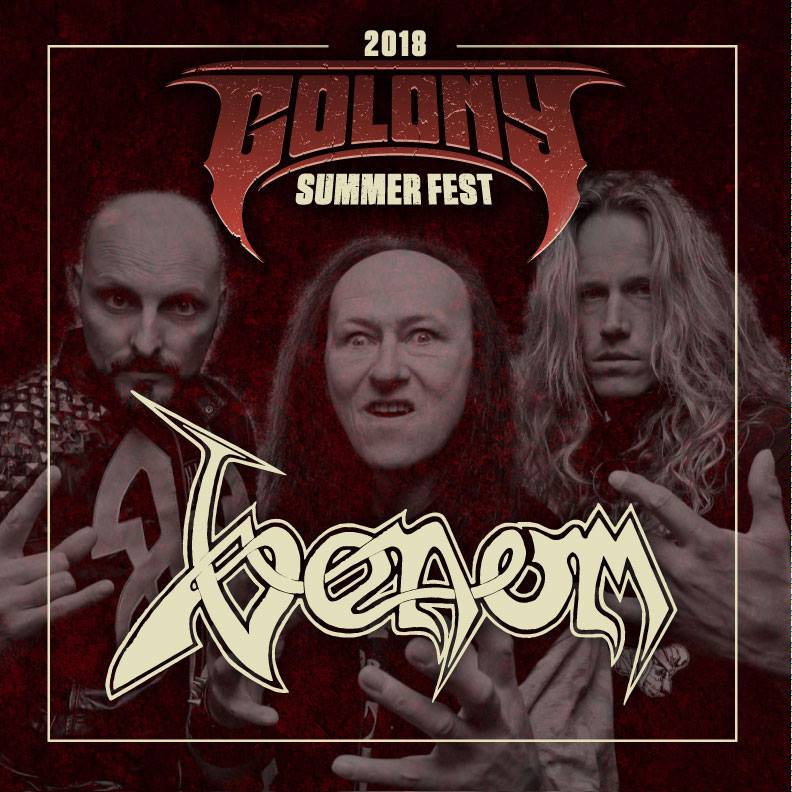 THE RETURN TO THE ALPS

Venom are confirmed to headline the MEH SUFF! METAL FESTIVAL on 7 September 2018. It will be the first time Venom play live in Switzerland since 1984. Expect no mercy. Save the date! 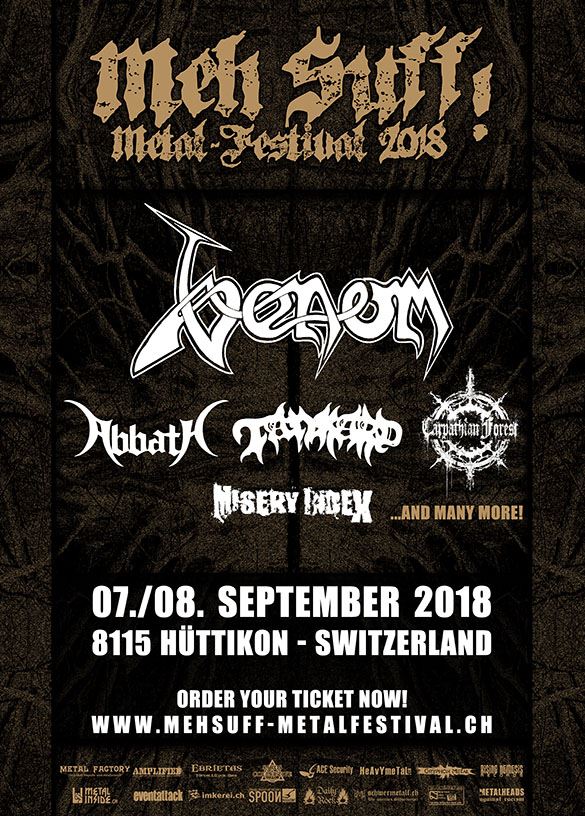 The largest rock festival in Canada, AMNESIA ROCKFEST, are celebrating the 13th edition on June 14-16 June, 2018 with an insane lineup once again. The small town in Montebello gets completely taken over and become a giant party for the weekend. Venom plays 14 June. Beware Canada! 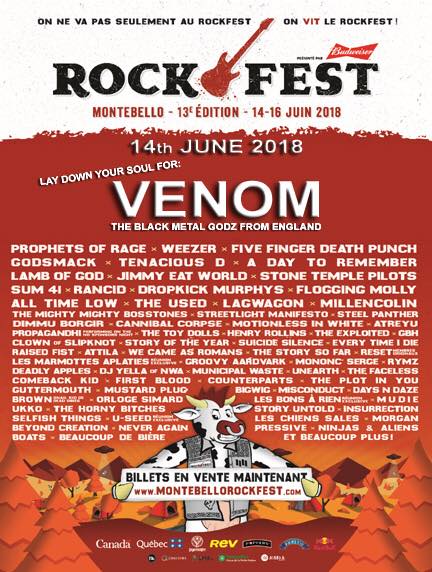