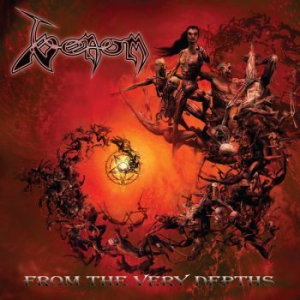 Even though clocking in at a generous 51 minutes, Venom´s newie displays not a single ounce of fat, not a riff out of place, no guitar solo longer than it needs to be, no fist-banging chorus wasted – this is a black metal surgical strike, the venom and violence delivered straight between the eyes. The music is heavy, brutal and old school Venom in sound. The riffs are excellent, the vocals are awesome, the drumming is great and the songs are solid. Every song on this album is metal thrashing mad. It is fast, it is angry and it is immense. Anyone with half an ear for the louder, more shouty-end of the musical spectrum will enjoy this.

The album intro, Eruptus, kicks off the album with swirling effects for just over a minute, but it channels the lava hitting the top of a volcano, leading right into the pugilistic battery of the title track. Rage spins a blistering solo ten seconds in, then that voice of hell, the one and only Cronos, ever Satan’s rancorous loudmouth, spews his full on Velveeta lyrics over the top while Dante pounds at the kit like a Neanderthal. Fast and furious with screaming guitars the song is an excellent appetizer for the rest of the longplayer.

The Death of Rock and Roll follows in the same vein with frenetic drums throughout, speedy guitars, and here, the band pounds their chest as they sing, “Light up the Marshall Stacks/We’re killing Kid Creole/With devastating thrash/The death of rock and roll”, as they announce Thrash’s dominance over the old standard of Rock. The song is another kick-ass anthem. Cronos’ vocals sound awesome, and Rage‘s solo here is killer!

The doomy, sludgy brilliance of the rather laid back attribute of Smoke is next , that to me is one of the kings of the tracklist; here, Rage throws some pedal-effect action but soon enough another massive rhythm section will fill the stereo-speakers with an abundance of bass lines and Cronos’ grunts, so lift your fist in the air and shout smooooooooke.

Temptation kicks back into high gear and showcases some notable hard-hitting grooves and somewhat melancholic and gory guitars, especially on the chorus. Long Haired Punks features a variety of captivating details like the significant chorus, fantastic basslines and an overall anarchic impression. A must for the live shows.

The album avoids fillers. There is a good idea behind each and every track. Although the pieces offer a wide range of various currents, the band scores with an homogeneous output.

A sinister laugh is heard at the beginning of Stigmata Satanas, as a ring of aural hellfire seems to surround wherever its coming from, and there's a reason for it. Delivered with such overwhelming force, its chugging riffs blowing steam, the track is a vicious mosh pit of energy, that infamous "bulldozer bass" of Cronos driving Venom hard through cursed landscapes.

Evil Law a creepy sound effect and simple drum beat lead into a spaced out, crushing riff, with the effects still swirling in the background. Here, Cronos delivers his most evil sounding performance,

giving off the vibe of a man possessed. One cannot help picturing a black altar, a pentagram, goat’s blood, and candles as the song pushes along with even more effects and menacing guitars. This track is Black Metal perfection.

The production by Cronos has just enough of the old filth that you know it’s Venom right from the gate(s of hell), but benefits from all the balls and brawn of a modern recording.

Grinding Teeth brings Dante’s drumming to the fore as he opens the track out front with quick snare riff and never lets up throughout. This is a nice change of pace for the band, as while there is still plenty of guitars, Dante gets to show his stuff from start to finish. Changing things up again, Overture is a one minute plus piece of light guitar and drum jaunt that seems out of place, but it is a unique piece and the perfect setup for Mephistopheles, which is a ripping Thrash tune replete with the “best of” thrash: fast riffing, multiple solos, screaming vocals, and break beats. If there was one song on this offering to show what Venom pioneered, this is it. Watch out for Danté’s drumming and the awesome high-hat sequence on this one.

Wings of Valkyrie shows the guitar and bass mirroring each other creating a very heavy track that uses a lot of triplets/gallops in a classic heavy metal style.

The final song is a call to all Legions around the world. It’s called Rise and the very first words you hear make that very clear. “All ye sinners rise, raise your hands and fists. With fire in your eyes, show no mercy!” It’s the perfect anthem for metalheads and stands out as another personal favorite of mine on this album.

Venom is still alive and kicking, the bands spirit is just as intact and badass as ever, and most importantly, Venom is a band you can trust to deliver the Metal goods with pride and might. The album is a magnificent musical odyssey which explores a variety of distinguished elements ranging from the awe-inspiring guitar work and noteworthy rendition of scales backed by basslines and pounding grooves from the dark pits to the assertive theme pertaining to blasphemy, and it’s solid and fun enough to live up to the legacy that we love them for. Venom is a band which grows old with dignity and From the Very Depths enriches the discography of a legend and whets the appetite for more.