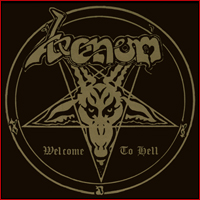 In August 1981 Venom had originally been asked by Neats boss David Wood to record some demos of all their songs, the band were given three days. After the session David said that he would like to release the demos as an Album. Venom had made their first Album deal. The same cover as the In League With Satan single was used, although the Record Company generously agreed to print the cover in Gold & Black..

Venoms debutalbum was the first - and possibly only - truly groundbreaking album to came out of the NWOBHM, no one had heard anything like Welcome To Hell before and the album hit down as a bomb. Each and one of the total eleven tracks is clear direct hits that never come to submit your memory. Certain - a little bit of Motörhead and the attitude from Punk but nevertheless something entirely new. The intensity in the tunes and Cronos cheeky barren song compares nothing contemporary. Striking is also which self-confidence and pondus this debut album smokes. The tunes vary from slow and heavy to fast and brutal.

The introductory Sons Of Satan opens skullcrushing and lets the immediate hell to break out. What a sound! With the massive speedy drumslaming, twangy bass and instantly infectious guitar riffs the production feels like one big filthy iron fist on the jaw. Tentimes harder than everyone those cushions today's studios throw forward together. Rawness is the word. The title tune takes at and is with it's suggestive mainriff a favourite that Venom never omitt from their liveset. The third track Schizo oscillates conscintiously and is an excellent example on Venoms unique ability to may together one insane speed with one catchy chorus. All big records need a respiration hole and that 47 seconds instumental Mayhem Without Mercy is precise what man needs in order to retrieve breath before Poison and Live Like An Angel ( Die Like A Devil) completes the first side. Both tunes incredible good.

Side two of the vinyl opens with the absolute classic Witching Hour, possibly Venom's single most important track, in it you'll hear a number of stylistic devices that would later pervade all extreme metal genres. Next up is the mighty 1000 Days In Sodom with good chorus and great bulldozer bass from Cronos. Angel Dust, twice as fast as the demoversion, unashamedly glorifies the drug that makes its users think they have the strength of rhinos. The hits just keep coming - In League With Satan, this favourite comes complete with backwards satanic intro, tribal-like drums and slow brooding riffs. I literally feel I'm "south of heaven" when this song is on. One last thing worthy of noting is the opening riff to the albums closer, Red Light Fever, I believe to be the HEAVIEST riff in 1981, hands down.

The record's grade are indisputable, highest possible and Welcome To Hell is a benchmark by which other musical extremists are still judged.