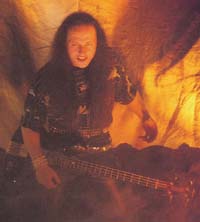 "They wanted us for the Donnington Festival last year. It looked like we were gonna get a five or six slot, in the daylight, with no stage show, no pyros...Really, the only way I'm gonna walk back on stage to do a Venom show is if we've got our shit together and it's a Venom show." Cronos in talk with Rob Clymo (Terrorizer January 1995) 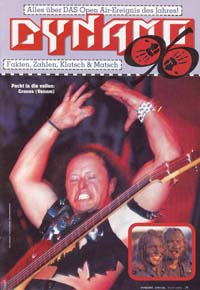 "Venom is the best worst band in the world!"

"The festivals 90.000 tickets was sold out in just six days, thanks to the reuniongig of Venom"
Concertreview of the Dynamogig 1996 (Rock Hard July 1996) 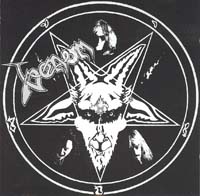 "JAAAAAAAAAA!!! Venom, the eternal Black Metal Gods is back!"

"The new versions of the three classics: Seven Gates Of Hell, Welcome To Hell and In Nomine Satanas is clearly improved"
Venom '96 review by Götz Kuhnemund (Rock Hard July 1996)

"I think the last time the band had a drink together was 1983. We like a drink...but not together. It doesn't mix. We do the job. We don't socialize" Abaddon in interview with Jeff Wagner (Metal Maniacs April 1997) 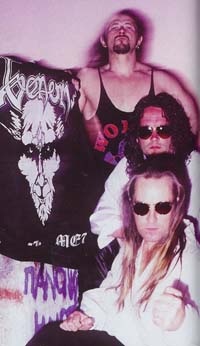 "I think it's part of the makeup to be imperfect. I think when things become perfect, they're greased too easily. We tend to spend more time after a gig, when we're still hyped up on adrenaline, talking about things that went wrong rather than things that went right" 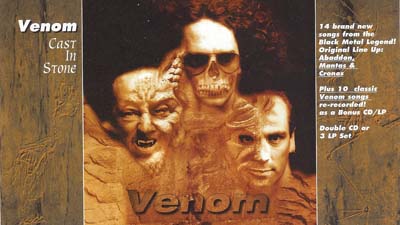 "What Venom have done is come up with an album that builds on the past, acknowledges the present and looks to the future. With Cast In Stone they have struck the perfect balance, remaining true to the original mould while simultaneously sounding contempory enough to be able to hold their heads high in 1997"

"What we have here is a rock solid, honest-to-Satan, balls to the wall HEAVY METAL album, the likes of which is rarely encountered these days. There's no room for the false nostalgia and tongue-in-cheek of today's retro bands. Venom invented this shit."
Cast In Stone review by Gregory Whalen (Terrorizer November 1997) 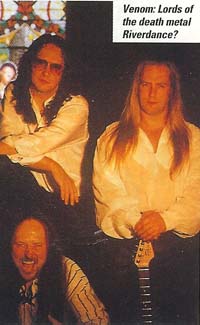 "Cast In Stone is the album that real Venom fans have been waiting for since guitarist Mantas, then bassist/shouter Cronos, quit in the '80s - and it rocks like the proverbial motherfucker!" 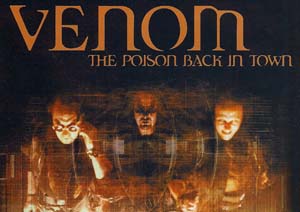 "Venom will always have spit in their face, gravel in their guts and stand proudly on the edge of total chaos"

"Venom's reputation has always preceded them, opening, as in all such cases, some new doors while closing others forever"
Damien (Terrorizer June 2000)

"We still have a sorta Sex Pistols stigma about us. People still don't know what to expect from us - Fuckin' hell, what are they gonna be like?"

"With Resurrection, there's elements of old Venom, hints of new direction, black metal, death metal, speed, thrash - everything's on there and it's got a killer production"
Mantas in interview with Damien (Terrorizer June 2000) 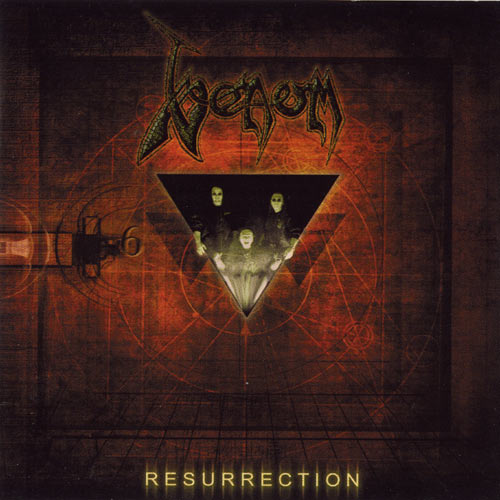 "They have succeeded in modernizing their sound without sounding at all trendy or even dated for that matter...this is just quality, timeless heavy metal!" Resurrection review by EvilG (Metal-Rules July 2000) 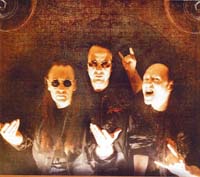 "Everyting seems a lot more sharper, tighter - the band feel better about themselves. It's just a lot more dangerous and urgent sounding, with a bit more anger, a bit more aggression, a bit more hunger, which was something Venom was starting to lose a little bit. That's what we were trying to do here, create an album that frightens the fuck out of people" Cronos in interview with Martin Popoff (August 2000) 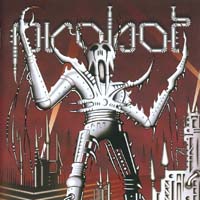 "Venom had tones that were just fucking darker than anything else. Every aspect of that band was exaggerated to the point where you couldn't focus on just one thing; it was all just so fucking loud and crazy."

"Cronos is more than just a vocal presence, he's a fucking demon"

"Elvis was my hero. The I moved on to Bowie, T.Rex, Status Quo and Led Zeppelin. But my serious, hardcore life-changing experience came with The Sex Pistols."

"I would never, ever have wanted to be in a band like Iron Maiden or Saxon, and I didn't want to be commercial or sound like anyone else. We wanted to create music that scared people. And we succeeded."
Cronos in interview with Geoff Barton (Classic Rock June 2004) 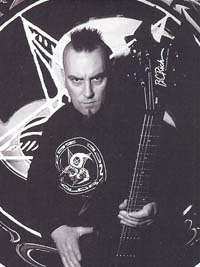 "My time with Venom is finished. We tried again with the original line-up in 1996 - we did the Dynaom Festival. You can't follow that." Mantas interview with Geoff Barton (Classic Rock March 2005) 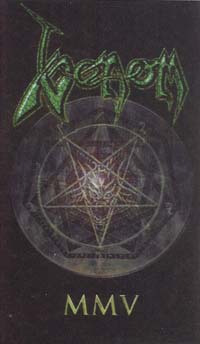 "Listening to these four CDs is a grueling task. By the end you feel like you've been exorcised. Your mind and body are hollowed-out husks, all your teeth have fallen out and the local vicar is lying on the floor with smoke coming out of his chest."

"The best is Cronos animalistic tirade at the end of Black Metal: ´Lay down your souls to the gods rock'n'r-oo-urgh-o-ll...urgh...uuuu-rgh...woo-aargh...oo-oo-ow...black metal!' Forget The Beatles' A Day In The Life, this is the finest moment in the history of recorded music."
MMV-boxset review by Geoff Barton (Classic Rock November 2005) 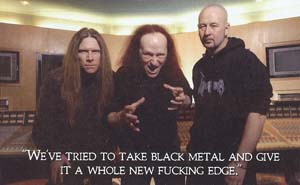 "I think we've really recaptured that energy and taken the old essence of Venom into the 21st Century."

"We wanted this album to be looser than the previous albums, to have a bit more spill, a bit more mess."
Cronos in talk with Dayal Patterson (Terrorizer January 2006) 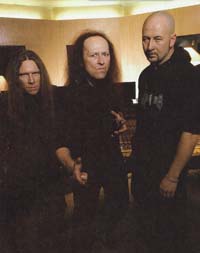 "At the minute, I know that Sweden are fuckin' doing the Can-Can at Norway, because for years the two of them have had a thing going about who's gonna get Venom first, Norway's like 'We will get Venom because we have Burzum and Mayhem,' and Sweden's like, 'Aye, but we have all the pretty girls, so Venom are bound to come here first!' Sweden were right. Burzum? Pretty girls? Pretty girls! Stay in jail, ya cunt."

"When I go onstage, I transform into Cronos. When I'm in the studio and me fuckin' hands are bleeding and I'm fuckin' dyin' on me feet with fuckin' sweat. Cronos comes out to play."

"Metal Black is more of a Venom album than Cast In Stone. The conviction's there and everything. It's got the essence. It's got the bite."

"Cronos, Mantas and Abaddon is the ultimate Venom line-up. I agree. But those guys have moved on, man. Talk to them! Listen to their albums! The way Metal Black has actually come about is that it's the right time and right place for us." Cronos in interview with Paul Schwarz (Terrorizer March 2006) 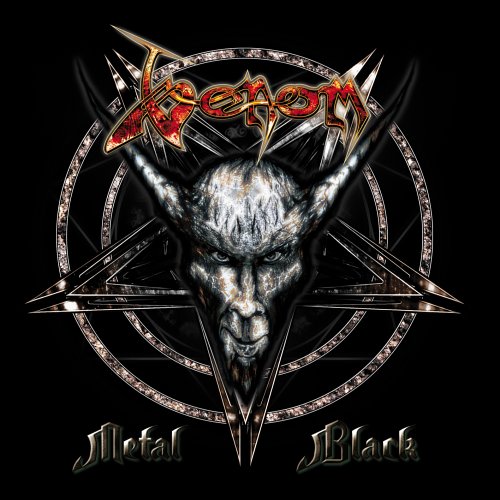 "Venom, of course, are always gonna be competing against their mythic past, but this is their best album since 1985's Possessed, the 2006 crew are moving the legend ominously forward"

"The titletrack shows that Cronos can out-growl anyone; he was doing this when Dani Filth was still clean"
Metal Black review by Malcolm Dome (Metal Hammer April 2006) 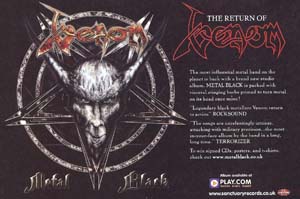 "With shit-kicking anti-hymns like Antechrist and Blessed Dead in plentiful supply, this is a formidable addition to a monstrous legacy"
Metal Black review by Dom (Kerrang! April 2006) 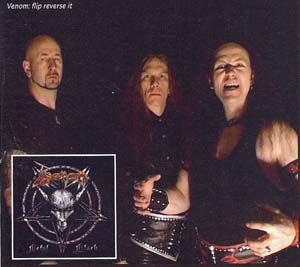 "It's a fine, fine din and reinstates Cronos in the throne of Satan's Lounge Bar where he belongs. True metal, heavy as fuck, full of clichés and not a hint of irony anywhere - just the way we like it, then!" Metal Black review by James Dominic 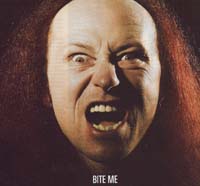 "We are entertainers first and foremost - if I wanted to b a murderer or a Satanist, I'do that full time instead of playing songs for a living" "With Metal Black I wanted to recapture that energy of the early Venom records" Cronos in interview with Jeff Kitts (Revolver April 2006) 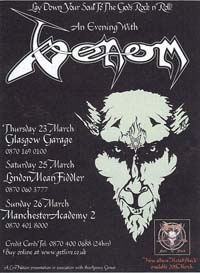 "It's a mess of barrelling percussion and unrefined guitar fury, but the grin spread across Cronos' face throughout reminds the hysterical enthusiastic crowd that he's still having fun" Live in London 2006 review by Alexander Milas (Kerrang! May 2006)

"Antton and Mykvs handle their onerous tasks respectfully, both injecting just enough haphazard chaos into their performances in keeping with the devil-may-care spirit of the original" Live in Manchester 2006 review by Damien (Terrorizer May 2006) 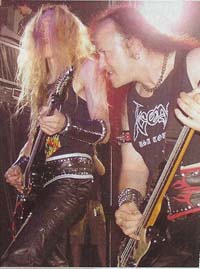 "Venom is a bigger concept than any of us. I feel I have a personal responsibility to that name. It's fucking legendary. I would hate to think that all those kids, all those legions over the last 28 years, would be let down. I want them to be proud of Venom, to be wearing those backpatches with pride and to be listening to those albums with 100% fucking integrity. If we didn't think that Metal Black was 100% pure Venom, it wouldn't have been worth doing"

"I find a lot of kids today have got their ears tuned into this nu-metal percussive thing. If you go put on something like Welcome To Hell or Sabbath Bloody Sabbath, it's all muddy, dark and dirty, and they think it doesn't sound too good. There's so much in there for them. One day they'll learn

"That was really our idea behind Venom - to put the punk back into metal. All the rockers sticking handkerchiefs down their trousers and putting on lipstick were just fucking stupid. We wanted to get back the motorbikers and the fucking hardcore fans, bring back the aggression"
Cronos in interview with Ian Christe (Metal Maniacs December 2006) 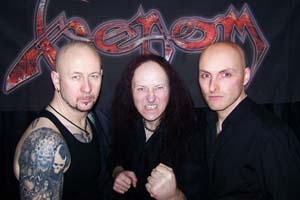 "Rage is a proper metalhead, it's great hearing the way he incorporates dive bombs into the riffs, it really reminds me of a certain former original member, he is quite an enigma"
Antton (January 2007)

"Venom will be even darker and heavier for the next release. The new song ideas that Antton and I have been composing over the last year will be exactly what the 'legions' expect from us, and will really test the abilities of the band members. There's going to be a lot of blood spilled making the next album. This band belongs to the fans and I'm going to stay true to the spirit of Venom no matter what sacrifices have to be made."
Cronos (January 2007)