"Probably 15 children...each" Mike H answer the question 'What are you ultimately going to get out of the Brazilian tour'

"We're going to walk away with the fact that we were the first band to take a chance and go and tour there. After us a lot more bands will be able to go and do it"

"Fuck you is universal but that doesn't get the gig on. The first thing we had to sort out was, who's interpreting?"
Abaddon in talk about the Brasilian tour with Dave Dickson (Kerrang! January 1987)

"Venom have picked up Black Metal, stripped away the tuneless deadwood and emerged with an album that's a giant step for Venom-kind. Where there was chaos - the song-writing department - now there is order, along with Thrashing brutality and Metallic quality" Calm Before The Storm review by Jon Hotten (Kerrang! October 1987)

"Venom have returned! They're alive again and this time they mean to wipe you all away. Venom have finally made it to the top of the metal tree where, as main instigators, they should always have been." Calm Before The Storm review by Mike Exley (Metal Forces October 1987)

"Calm Before The Storm is still Black Metal. It's not any less loud or heavy, it's just more controlled. The album sort of bites."

"As you get on in this business, you get better. You learn the whole time. For me and Abaddon to go to a Slayer gig, it's piss boring, because it's like listening to Welcome To Hell again. There's no imagination, and complete tunnel vision. David Bowie never stuck to a trend, nor did any of the greats, so there's no way we will." Abaddon and Cronos in interview with Jon Hotten (Kerrang! November 1987)

"Okej, so we use a few keyboards, vocal harmonies and backing vocals on this album, but there is no way you could listen to Calm Before The Storm and say this is Van Halen or something because we're still Venom and we're still heavy, it's just something totally different from the aerly days. We're no longer limited so we like to use more ideas." Abaddon in interview with Mike Exley (Metal Forces November 1987) 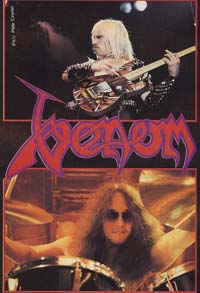 "Over the past few years, the band has been associated with dark side of life as you know. But we don´t advocate death. If you´re dead, it´s quite hard to buy our albums" Jim Clare in interview with Phylis Pollock (Power Metal April 1988)

"Venom didn´t set out to be 'a group', we set out to be the biggest, loudest, daftest group, and we achieved that. Now what we´re able to put in is a certain amount of musicianship which we didn´t have before."

"The title sums up a lot what we were, 'Prime' being the first, and 'Evil' being the malevolent thing which we were always working at."
Abaddon in interview with Mark Day (Metal Hammer June 1989) 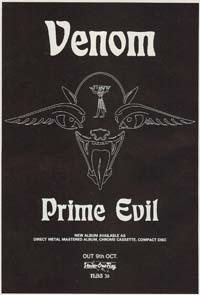 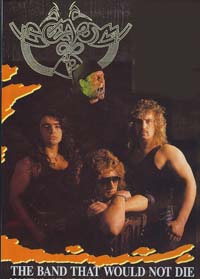 "I think you´ve got to say that we´re aiming for their kid brothers now. These young kids that are into Anthrax, Metallica or Slayer, they´ve stepped over the Venom thing, they haven´t seen that we started the thing. But when they find out that we played Hammersmith Odeon for our first British show they might be interested." Abaddon in interview with Mark Day (Metal Hammer November 1989) 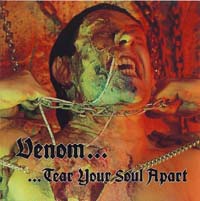 "We just haven´t concentrated hard enough on England I guess and you either have to work this country pretty hard or just stay out altogether."

"For me satanism is a Religion and as such has nothing to do with Rock´N´Roll."
Abaddon in interview with John Duke (Metal Hammer 1990)

"Venom were always crap, and I loved them for it; now they can play slightly, the intensity and rawness is gone and what´s left is basically nothing more than an average Heavy Metal album. Competent yes...boring yes!" Temples Of Ice review by James Sherry (Metal Hammer June 1991) 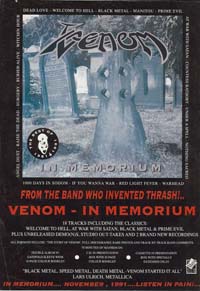 "Venom were the first thrash band I heard on record - it really pushed me to be the best."
Kerry King, Slayer (1991)

"That first album they did, 'Welcome To Hell' was a classic! Black Metal, Speed Metal, Death Metal - Venom started it all in 1981 with that one album, you can´t take that away from them."
Lars Ulrich, Metallica (1991) 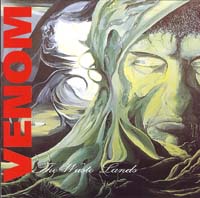 "Mr Dolan, he´s obviously got a perfectly strong set of pipes, so why does he insist on aping long-departed frontman Cronos?! All those rolled 'r's are just silly."
The Waste Lands review by Jason Arnopp (Kerrang! 1992)

"Apologies, chaps, but Venom made their one statement years ago, and this does nothing but char the memory."
The Waste Lands review by Robert Reed (Melody Maker 1992)

"Yes, we have been offered enotmous sums to get back with Cronos. But this line-up is comfortable and strong. Why would I want to compromise it just for a couple of quid? It would be like painting the Mona Lisa then going back to put a red nose on her! No thanks!" Abaddon in interview (Metal Forces January 1993) 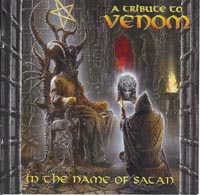 "I keep seeing these stories about the original line-up reforming. It´s all bollocks, though - and I think that if it did ever happen, it´d have to be for a lot of money. A fair bit has been offered, but not enough to make us wanna do it - because it´d be really difficult for various reasons."

"I guess the nearest people are gonna get to old Venom is this tribute thing."
Abaddon in intreview with Mike Peake (Kerrang! 1994)